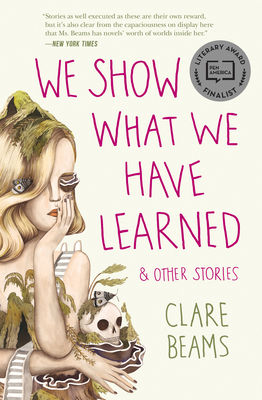 We Show What We Have Learned & Other Stories

Winner of the Bard Fiction Prize and a finalist for the PEN/Robert W. Bingham Prize for debut fiction, the Young Lions Fiction Award, and the Shirley Jackson Award for a single-author collection

The literary, historic, and fantastic collide in these wise and exquisitely unsettling stories. From bewildering assemblies in school auditoriums to the murky waters of a Depression-era health resort, Beams's landscapes are tinged with other-worldliness, and her characters' desires stretch the limits of reality.

Ing nues at a boarding school bind themselves to their headmaster's vision of perfection; a nineteenth-century landscape architect embarks on his first major project, but finds the terrain of class and power intractable; a bride glimpses her husband's past when she wears his World War II parachute as a gown; and a teacher comes undone in front of her astonished fifth graders.

As they capture the strangeness of being human, the stories in We Show What We Have Learned reveal Clare Beams's rare and capacious imagination--and yet they are grounded in emotional complexity, illuminating the ways we attempt to transform ourselves, our surroundings, and each other.

Clare Beams's story collection, We Show What We Have Learned (Lookout Books), was a Kirkus Best Debut of 2016; was longlisted for the Story Prize; and was a finalist for the PEN/Robert W. Bingham Prize, the New York Public Library's Young Lions Fiction Award, and the Shirley Jackson Award. Her fiction appears in One Story, n+1, Ecotone, The Common, the Kenyon Review, Hayden's Ferry Review, Electric Literature's Recommended Reading, and The Best American Nonrequired Reading, and has received special mention in The Best American Short Stories 2013 and The Pushcart Prize XXXV. She has received fellowships from the National Endowment for the Arts, the Bread Loaf Writers' Conference, the Sewanee Writers' Conference, and the Sustainable Arts Foundation. After teaching high school English for six years in Falmouth, Massachusetts, she moved to Pittsburgh, where she now lives with her husband and two daughters. She has taught creative writing at Carnegie Mellon University and St. Vincent College. Her novel The Illness Lesson will be published by Doubleday/Knopf in 2020.
Loading...
or support indie stores by buying on