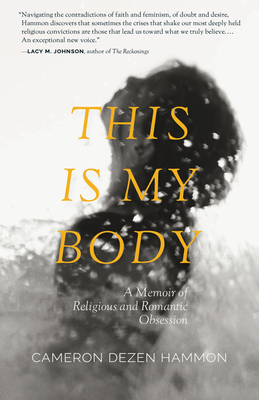 This Is My Body

A Memoir of Religious and Romantic Obsession

Winner of the Nonfiction Discovery Prize from the Writers' League of Texas, a bronze medalist for the Independent Publisher Book Award in Creative Nonfiction, and a finalist for the Foreword INDIE Book of the Year in Autobiography and Memoir

In this memoir of faith and faltering, musician Cameron Dezen Hammon, a Jew-ish New Yorker, finds herself searching for love, meaning―a sign. She's led to Coney Island, where during a lightning storm, she is baptized in the murky waters of the Atlantic by a group of ragtag converts. After years of trying to make a name for herself as an artist, she follows her boyfriend and new God to Houston, Texas, the heart of American evangelical subculture. Her job at a suburban megachurch there has her performing on stage before crowds, awash in lights and smoke, yet grappling with outdated gender expectations―look pretty but not too pretty, young but not too young―and ultimately her identity as both a believer and feminist.

This Is My Body weaves her zealous conversion with the search for a more progressive and fluid theology, the endurance of marriage with an unexpected obsession that threatens to upend her carefully constructed life. From speaking in tongues to street preaching, from biblically sanctioned discrimination to sexual assault, she invites readers inside her tender and harrowing journey. Part inspiring spiritual memoir, part incisive cultural critique, her story of finding and losing faith is ultimately one of rebuilding a truer, braver self.

Author and musician Cameron Dezen Hammon's writing appears in The Kiss anthology from W. W. Norton, Catapult, Ecotone, the Literary Review, the Houston Chronicle, NYLON, and elsewhere; and her essay "Infirmary Music" was named a notable in The Best American Essays 2017. She earned an MFA in creative writing from Seattle Pacific University and is a writer-in-residence for Writers in the Schools in Houston, where she lives with her family. This Is My Body is her debut book.
Loading...
or support indie stores by buying on