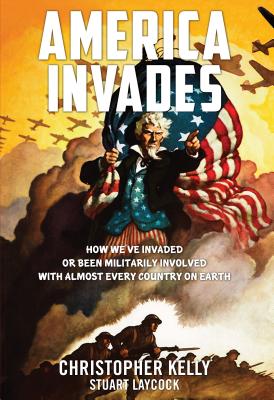 Americans have invaded nearly half the world's countries and been militarily involved with all the rest, except Andorra, Bhutan and Liechtenstein. Christopher Kelly and Stuart Laycock take you on a global tour of America's military activity around the world from the halls of Montezuma to the shores of Tripoli and everywhere in-between. Whatever your political views this is an extraordinary and often surprising story. With personal photos, maps and an index to assist America Invades: How We've Invaded or Been Militarily Involved with Almost Every Country on Earth gives us history as it should be taught--calling out for more

Christopher Kelly is the former Chairman of Chyron Corporation and a retired television executive. He has had a lifelong passion for military history, and many of his family have fought in previous American wars including one, Stephen Van Rensselaer of NY, who led an ill-fated invasion of Canada. He is a graduate of the University of California at Berkeley.Stuart Laycock has a degree from Cambridge University. He has worked in advertising, marketing, and TV. Stuart has authored or co-authored a number of history books in the UK, including All the Countries We've Ever Invaded and the Few We Never Got Round To.
or
Not Currently Available for Direct Purchase
Copyright © 2020 American Booksellers Association