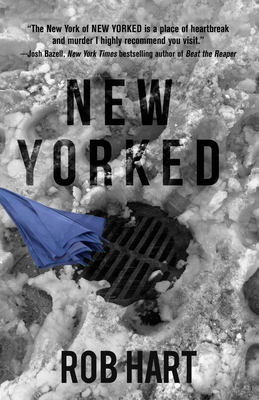 Nominated for the Anthony Award for Best First Novel Ash McKenna is a blunt instrument. Find someone, scare someone, carry something; point him at the job, he gets it done. He generally accepts money upon completion, though a bottle of whiskey works, too--he's comfortable working on a barter system. It's not the career he dreamed about (archeologist) but it keeps him comfortable in his ever-changing East Village neighborhood. That's until Chell, the woman he loves, leaves him a voicemail looking for help--a voicemail he gets two hours after her body is found. Ash hunts for her killer with the grace of a wrecking ball, running afoul of a drag queen crime lord and stumbling into a hard-boiled role playing game that might be connected to a hipster turf war. Along the way, he's forced to face the memories of his tumultuous relationship with Chell, his unresolved anger over his father's death, and the consequences of his own violent tendencies. NEW YORKED takes you deep into the seedy underbelly of New York with an unforgettable literary voice steeped in the classic noir tradition, and a glimpse at a city disappearing right before our very eyes.

Rob Hart is the associate publisher at MysteriousPress.com and the class director at LitReactor. Previously, he has been a political reporter, the communications director for a politician, and a commissioner for the city of New York. Rob is the author of The Last Safe Place: A Zombie Novella, and his short stories have appeared in publications like Thuglit, NEEDLE, Shotgun Honey, All Due Respect, and Helix Literary Magazine. He lives in New York City. Follow Rob Hart online at robwhart.com and @robwhart.
Loading...
or support indie stores by buying on