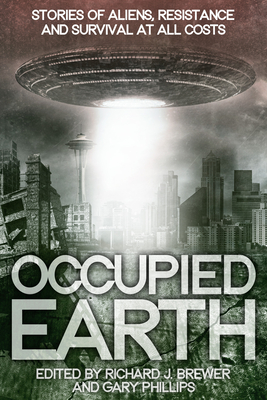 Stories of Aliens, Resistance and Survival at All Costs

RESISTANCE IS ALL For years, writers and filmmakers have speculated about the possibility of the Earth being invaded by aliens from another planet. But what if the aliens have been watching us, infiltrating us via human collaborators, or even surgically altering themselves to look human? Occupied Earth is a groundbreaking anthology that explores the idea of what the world would look like years after its conquest. 20 years after a successful invasion by the Makh-Ra, humanity still exists, only it has become subservient to a race of occupiers who govern the devastated planet. But, as much at things continue with some sense of normalcy, something has happened in the Mahk-Ra's empire. Earth, once considered a strategic beachhead of major importance to the Empire, has been downgraded in its value. Things are starting to degrade. Our planet is the last place any self-respecting Mahk-Ra officer wants to be assigned. Yet, despite everything, life continues. These stories bring us face to face with annihilation -- and show how we can pull ourselves back from the brink. Featuring Rachel Howzell Hall, Lisa Morton, Matthew V. Clemens, Howard Hendrix, Nathan Walpow and more, OCCUPIED EARTH is coming. Stay safe. Stay strong. Survive at all costs.

Richard J. Brewer, a native Californian, has always been a lover of stories and storytelling. He has worked as a writer, actor, bookseller, story editor, book reviewer, movie and television Development Executive, and audiobook narrator. He was co-editor of the critically acclaimed Bruce Springsteen inspired short story anthology Meeting Across the River. His most recent short story, Last to Die, was included in another anthology inspired by The Boss, Trouble in the Heartland, and was noted as one of the Distinguished Mystery Stories of the year in The Best American Mystery Stories 2015. Gary Phillips is the author of the Ivan Monk series, and is the author of numerous novels and graphic novels. He co-edited and contributed to the acclaimed Black Pulp, has short stories in the upcoming Asian Pulp and Jewish Noir, and wrote Big Water, a graphic novel about the fight for that most precious of resources. A reviewer said of his novella The Extractors, about a one percenter who steals from the one percent -- Gary never disappoints. Great plots and complex and interesting characters, McBleak being one of them. He lives in Los Angeles. Contributors to the anthology include: Rachel Howzell HallDavid W. HallAdam L. KorenmanLisa MortonRob HartCliff AllenMatthew V. ClemensHoward V. HendrixMarsheila RockwellJeffrey J. MariotteRichard M. JohnsonCraig Faustus BuckJessica KayeNathan WalpowAdam Lance Garcia
Loading...
or support indie stores by buying on