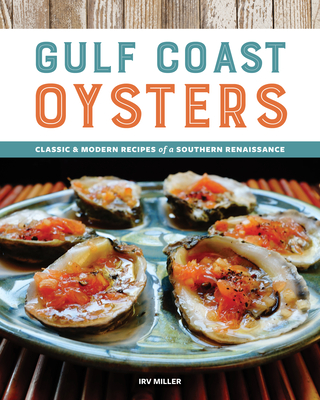 It's been said Gulf Coast oysters have the cleanest taste of any oyster: ..".it tastes of the sea and not much else, and for that reason they should be the oysters against which all others should be measured."

Gulf Coast Oysters: Classic & Modern Recipes for a Southern Renaissance is the latest cookbook from acclaimed and award-winning chef, Irv Miller. Beautifully photographed and replete with mouth-watering recipes, Gulf Coast Oysters is a joyful and thorough exploration of Gulf oyster culture that honors the many oyster classics of the Gulf foodways while also putting a fresh, modern spin on preparing "panhandle pearls."

Going beyond its delicious recipes and stunning photos, Gulf Coast Oysters also focuses on preserving the Gulf's cross-cultural, Southern traditions and a goal of creating new interest in seafood-sustainable products. Miller's years of hands-on experience of modernizing the way the Florida Panhandle thinks about food, as well as his support of sustainable food-producing practices, has provided him the unique and credentialed perspective for telling the story of the ever-changing food scene along the Gulf Coast.

Whether you're a native of the Gulf Coast, a passionate epicurean, or simply part of the growing population of oyster fans that's booming from coast-to-coast, Gulf Coast Oysters: Classic & Modern Recipes for a Southern Renaissance is an bountiful book of diverse Gulf oyster recipes, striking photography, and an engaging look at the culture surrounding the ancient mollusk's place on Gulf coast.