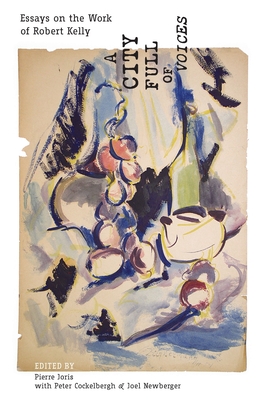 A City Full of Voices

Essays on the Work of Robert Kelly

Robert Kelly is one of the major and most prolific American poets of our time. Between 1961 when his first collection, Armed Descent, was published by Hawk's Well Press, and Seaspel, brought out in 2019 by Lunar Chandelier Collective, Kelly has published some 66+ books of poetry as well as 14 volumes of prose, including novels, short stories, & essays. A City Full of Voices is the companion volume to the 2014 A Voice Full of Cities, the Collected Essays of Robert Kelly, also published by Contra Mundum Press.

This book gathers a wide range of commentaries -- from single-phrase response to full-blown essay, personal meditation & various forms of book reviews -- on Kelly's monumental oeuvre. It covers early reception by a previous generation of poets -- such as Charles Olson and Robert Creeley -- welcoming Kelly among their company, mid-career assessments via an array of compa eros & compa eras for whom Kelly's work has been sustenance and inspiration over many decades, and goes all the way to critical investigations by those younger readers & students of the work coming to Robert Kelly's poetry today. Eminent voices among the contributors include Guy Davenport & Stan Brakhage, Paul Blackburn & Diane Wakoski, Jerome Rothenberg & Clayton Eshleman, George Quasha & Charles Stein, P. Adams Sitney & Sharon Mesmer, John Yau & Jennifer Moxley, Jed Rasula & Mary Caponegro, among many others.

Robert Kelly's own voice can also be heard in a series of "Threads" (in which various interview excerpts directly, or indirectly, speak to the sections or "books" they precede or follow) that link both in form & content back to the previous volume, and in three landmark interviews with Kelly in full, that also mark three different moments in time: 1963, 1974, & 2007. Both volumes together thus offer the reader not only a "collected" & "critical" essays, but also a "Selected Interviews."

It may seem surprising -- & in fact it is -- that an oeuvre of such distinction, complexity, and depth has had to wait until the poet's 84 year to be f ted with a volume of essays. But here it is: A City Full of Voices, the first substantive multi-voiced gathering of writings about one of the absolutely opulent, lavish, generous & bountiful life-works by one of the great contemporary American poets.