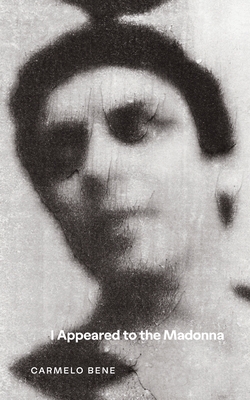 I Appeared to the Madonna

Carmelo Bene (1937-2002) was a notorious Italian actor, writer, and director who inaugurated his theater in 1959 with Camus' Caligula then exploded onto the artistic scene with his outr Christ '63. Later, he collaborated with Pasolini, Glauber Rocha, Bussotti and others as well as philosophers, like Gilles Deleuze.

In 1983, the fiercely polemical grand provocateur wrote I Appeared to the Madonna, a kind of ars poetica and chronicle of his life, self-described as very risky, imaginary, and at the same time real. The work is founded on Bene's concepts of non-being, abandonment, and lack. As Piergiorgio Giacch noted, "the phrase 'I appeared to the Madonna' was never a saying but a doing of Bene's, an event that marked the body of his actor and the corpus of his works: appearing to Our Lady has become an addition to his grace and the accomplishment of his genius."

Less factual autobiography and more autobiographical poem, I Appeared to the Madonna tests the limits of lyric versification while its prose, just as Bene's films, is not writing alone but a form of music. This incendiary testament of Bene's life includes tales of his combative encounters with critics, the public, and his iconoclastic views on theater, cinema, poetry & more, including chapters on Salvador Dal , Eduardo De Filippo, and Jules Laforgue as well as anecdotal elucidations of some of his plays and films. True to Bene's character, I Appeared to the Madonna is at once furious, incandescent, comic, and brutally sarcastic; it resounds with beautifully fierce contempt for stupidity and a hallowed view of his own brilliance -- finally, fulfilling Dal 's prediction, he overcame the suffering of the artist and became a genius.

Also included herein is Bene's "An Autographical Portrait" (the bios has been subtracted), which was conceived as an introduction to his complete works. In this portrait, Bene rehearses again his many lives, enumerating the uninterrupted series of illnesses and repeated surgical interventions that frequented his body from his childhood to his death. A body disintegrated becomes a disembodied voice, and all vulgar action (a theater "figure") is subtracted and the lives become works: "What has been disintegrated," Bene notes in his 'Portrait, ' "is the concept of authorship exceeded by the deprogramming that occurs in the production and the constitution of ourselves as works of art, of which only the dregs are the object of the typographical body." In this miraculous aphasia-apraxia, Bene's de-mental disarticulation can only parody the unheard song. He listens. With closed mouth. Sans author. The inexpressible masterpiece that was, and is, Bene lives.

Translated by Carole Viers-Andronico, this is the first in a series of several separate volumes of Bene's writings that Contra Mundum will publish. As one of the only true 'spiritual' heirs of Artaud, Anglophones must at last reckon with Bene's genuinely radical transvaluation of every form of aesthetics.