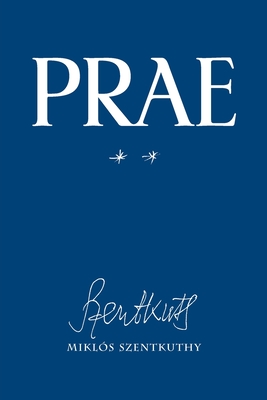 Considered an eerie attack on realism, when published in 1934, Mikl's Szentkuthy's debut novel Prae so astonished Hungarian critics that many deemed it monstrous, derogatorily referred to Szentkuthy as cosmopolitan, and classified him alien to Hungarian culture.

﻿Incomparable & unprecedented in Hungarian literature, Prae compels recognition as a serious contribution to modernist fiction, as ambitious in its aspirations as Ulysses or la recherche du temps perdu. With no traditional narration & no psychologically motivated characters, in playing with voices, temporality, and events, while fiction, Prae is more what Northrop Frye calls an anatomy or satire: the basic concern of the book is intellectual, its pervading mood is that of a comedy of ideas.

As a virtual novel that preempts every possibility for its realization, it is a novel but only virtually so, a book which is actually a prae-paration for an unwritten novel. In this, it maintains the freedom & openness of its potentialities, indicative for instance in the Non-Prae diagonals, a series of passages that intercut the novel & continually fracture space & time to engage in what one of the figures of the book calls the culture of wordplay or dogmatic accidentalism. "The book's title," said Szentkuthy, "alludes to it being an overture. A multitude of thoughts, emotions, ideas, fantasies, and motifs that mill and churn as chimes, an overture to my subsequent oeuvre." By challenging the then prevailing dogmas and conventions of prose writing, Szentkuthy was said to have created a new canon.

Largely unread at the time, Prae eventually gained cult status. To some critics, the book is not only one of the representative experimental works of the early 20th century, but in its attempt to bring 'impossible literature' into being, it also presages the nouveau roman by almost 30 years. And in its rejection of sequentiality and celebration of narrative shuffling, Prae enacts what is conceptually akin to the cut-up. Few of Szentkuthy's contemporaries would reveal with equal bravura and audacity the new horizons that were opened up for narrative forms after the era of realism.

In Frivolities & Confessions, Szentkuthy said that his goal with Prae was "to absorb the problems of modern philosophy and mathematics into modern fashion, love, and every manifestation of life." Translated for the first time since its original publication in 1934, Vol. II of this legendary and controversial Hungarian modernist novel is now at last available in English.