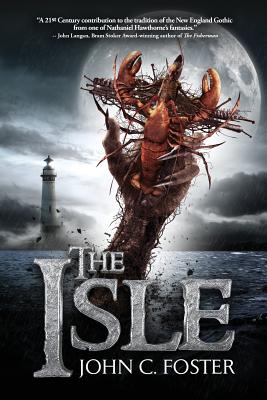 EXPOSE THE DARKEST OF SECRETS AT THE EDGE OF THE WORLD

Start with an isolated island in the rainswept North Atlantic, add an enigmatic community of hostile inhabitants, throw in the body of a fugitive found dead by mysterious causes, combine with an ages-old supernatural curse that has lethal implications, and garnish with a secret so horrifying it is best left unspoken, and you've got the recipe for the dark feast that is The Isle.

A deadly menace threatens a remote island community and every man, woman and child is in peril. Sent to the isle to collect the remains of a dead fugitive, US Marshal Virgil Bone is trapped by the forces of nature and the will of man.

As the body count rises the community unravels, and Bone is thrust into the role of investigator. Aided by a local woman and the town pariah, he uncovers the island's macabre past and its horrifying connection to the killings.

Some curses are best believed.

Sometimes the past is best left buried.

And some will kill to keep it so.

Praise for The Isle

"With The Isle, John Foster makes a twenty-first century contribution to the tradition of the New England Gothic, taking his lawman protagonist off the coast of the mainland United States to visit a small island in the North Atlantic whose inhabitants might have settled there from one of Nathaniel Hawthorne's Puritan fantasies. Himself riven by guilt over past misdeeds, U.S. Marshall Bone encounters a community on whom the sins of their ancestors continue to exert a very terrible and a very real force. Fast-moving, gripping, it's a tale straight from Old Man Atlantic's barnacled treasure chest." - John Langan, Bram Stoker Award-winning author of The Fisherman

"Brooding and claustrophobic, one hell of a scary ride. You won't soon forget your visit to The Isle." - Tom Deady, Bram Stoker Award-winning author of Haven

"John Foster masterfully weaves New England folk horror into a hard-boiled murder mystery to form a wholly original and gripping novel that will keep you guessing as the dread builds like a tide rolling over the rocky shore. Strange rituals, hidden histories, and dangerous paranoia intersect on The Isle in ways that turn northeastern peculiarity into something uniquely horrific and thoroughly engrossing to read." - Ed Kurtz, author of The Rib from Which I Remake the World and Nausea

"If you're the kind of person who seeks out hidden places with awful histories, then this book is for you. You'll feel the damp and the chill, you'll hear the shrieks and the inhuman mutter, you'll see those children and their awful games. Read it in a safe place." - Karen Heuler, author of The Inner City