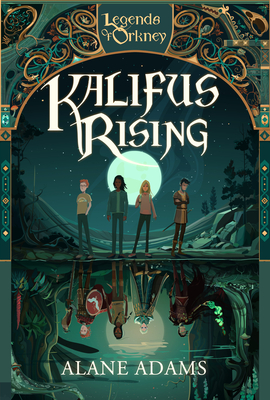 2017 Moonbeam Children's Book Awards: Gold Medal, Best Book Series - Chapter Book
"Sam's internal struggles and focus on the dark side of his witch heritage are reminiscent of Anakin Skywalker and will likely appeal to fanboys and fangirls, particularly as he 'must face the darkness inside.' Combined with strong female leads, both heroic and villainous, the ever growing and changing cast of characters has something for everyone. Fantasy, mythology, a touch of romance, and enough sword fights and battles to appease even the most action-hungry make Kalifus Rising a well-rounded, solid choice for those craving a new type of adventure." --Foreword Reviews FIVE STAR review

Sam Baron just freed Orkney from the ravages of the Red Sun--but now, imprisoned by Catriona, leader of the Volgrim Witches, Sam finds the darker side of his half-god, half-witch heritage released, and he fears he might destroy what he saved. Unable to resist the witches' enchantments, Sam has become their most potent weapon, and is leading an army of monstrous men against Skara Brae. Sam's only hope for salvation lies with his three best friends and a mystical artifact known as the Moon Pearl. Keely travels north in search of the pearl, while Howie prepares for the gathering onslaught. Leo seeks a powerful artifact in the underworld, and faces an ancient evil that could be an even greater threat than Catriona and her cronies. As Sam's friends rush to save him, other forces are at work in Orkney's shadows--forces that could help free Sam, or condemn him to the darkness forever.
or support indie stores by buying on
Copyright © 2020 American Booksellers Association