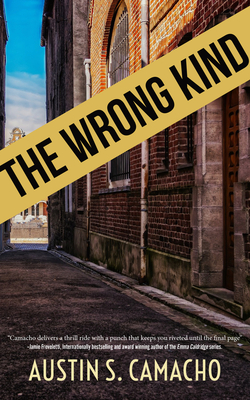 A distraught woman hires private investigator Hannibal Jones to track down her daughter who has run away, trying to escape the homeless shelter life her mother has come to accept. No sooner has Hannibal found Connie Blanco
than he finds himself entwined in a gang war and a murder. The corpse is barely cold before a second murder follows and Hannibal finds himself entangled in a complex plot…but who is the mastermind of this twisted scheme?

"THE WRONG KIND features Hannibal Jones, a PI who's tough and tenacious, but with a heart, think of Jim Rockford of the Rockford files meets Jack Reacher. When he takes on MS-13 on behalf of a desperate mother in search of her daughter, he won't stop until he finds her. You'll love Hannibal Jones, and Camacho delivers a thrill ride with a punch that keeps you riveted until the final page." — Jamie Freveletti, Internationally bestselling and award winning author of the Emma Caldridge series

“One word that immediately comes to mind when describing Austin S. Camacho’s writing is that it’s SMOOTH. While The Wrong Kindis an engaging, page-turning private investigator procedural with a complex plot and well-drawn characters (Hannibal Jones is as cool as the classic rock he listens to!), the prose has the pace and rhythm of a smoky, after-hours jazz club. For me, The Wrong Kind is the Right Kind of mystery entertainment!” — Raymond Benson, New York Times best-selling author of BLUES IN THE DARK

"Success breeds trouble for Hannibal Jones when he finds himself in the middle of a vicious gang war. But it’s how he gets out from beneath the blood and bodies that makes THE WRONG KIND the right kind of read." — Reed Farrel Coleman, New York Times Bestselling author of What You Break

"An utterly brilliant read! Camacho consistently manages to thread the needle of creating breathtaking plots and rich psychological insights into the characters he populates his books with. The Wrong Kind lives up to his high standards. And, let’s face it, Hannibal Jones is one of the best heroes in modern thriller fiction. I love him! This book is a must-read!" — Jeffery Deaver, international best selling author of The Bone Collector and The Never Game

"Wise-cracking P.I. Hannibal Jones is my kind of hero: a gentleman who knows how to throw a good punch. Reminiscent of Raymond Chandler's classic noir, Austin Camacho's THE WRONG KIND starts as a standard missing person's case, but quickly morphs into something much darker, and entirely unexpected. What a terrific read!" — John Gilstrap, NYT bestselling author of the Jonathan Grave thriller series

"As I read Austin Camacho’s latest, The Wrong Kind, I was reminded why Camacho's hero, Hannibal Jones, is so beloved by readers everywhere. A noble soul, he’s whip-smart, powerful, and so slyly irreverent I found myself wishing he could step off the page and be my BFF. In delivering The Wrong Kind, Camacho again demonstrates he truly knows how to craft the right kind of adventure." — Julie Hyzy, New York Times bestselling author

"Private investigator Hannibal Jones is hired to find a woman’s daughter who she has not heard from in a while. It is unlike her daughter not to check in with her mother on occasion. It doesn’t take Hannibal long to track Connie down but once he does he finds himself in the middle of drug deals gone bad and murder. Hannibal thought once he found Connie his job would be done but boy was he wrong. After finding Connie Hannibal is pulled into the middle of a gang war a place he never intended on being but to save Connie and himself he may have no choice but to comply with the gang especially when Connie goes missing again. The Wrong Kind is filled with mystery, suspense, secrets with twists after twists. Just when you think the crime may be solved bam you are hit with more secrets and twists. The Wrong Kind is like one of those slow burn mysteries that release its secrets one at a time and very slowly slow enough to keep you hanging on and wanting more trying to figure out where it will lead on down the line. It will keep you on your toes and glued to your seat page after page until the last page is turned. The Wrong Kind is the first Hannibal Jones mystery and the first book by Austin S. Camacho that I have read but I hope it won’t be the last. I can’t wait to check out more of the Hannibal Jones mystery novels. If you like mystery and suspense books then I believe you will like The Wrong Kind." —Avid Reader

"P.I. Hannibal Jones has a job to do. Find a woman's daughter who she has fears has disappeared since she hasn't heard from her in awhile. Finding Connie is the easy part of the job. Staying alive and keeping her safe is another thing. Hannibal finds himself caught in a gang war, bad drug deal, and even a murder. The story is full of action pack drama. Hannibal Jones is such an intriguing character that has so much charm and is very intelligent. How he finds himself in the pickle he is in makes for such an exciting read. Each page left me wanting more and more and guessing what would happen next. Connie is another great character, she brings mystery and drama with her. An amazing story that I for one really enjoyed. This is a must read if you love a good mystery thriller." —enchanting Reviews

"While this is a good read, it has something even better. At least to my liking. It has Hannibal Jones, Private Investigator. I just love mysteries and a good, somewhat honorable, character that is kind and even good, well, also sometimes bad when it saves the good people. While there were plenty of twists and turns and all of the things a good mystery should contain here, it was Hannibal that made the story for me. No question about it." —Our Town Reviews

Austin S. Camacho is the author of seven novels about Washington DC-based private eye Hannibal Jones, five in the Stark and O’Brien international adventure-thriller series, and the detective novel, Beyond Blue. His short stories have been featured in several anthologies including Dying in a Winter Wonderland – an Independent Mystery Booksellers Association Top Ten Bestseller for 2008. He is featured in the Edgar nominated African American Mystery Writers: A Historical and Thematic Study by Frankie Y. Bailey. Camacho is also editorial director for Intrigue Publishing, a Maryland small press.
Loading...
or support indie stores by buying on