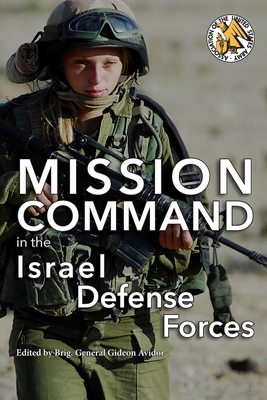 The Israel Defense Force have relied on mission command since their foundation. This essay collection explores Israel's military strategy through the understanding of mission command and its relation to command and control. MISSION COMMAND IN THE ISRAEL DFENSE FORCE provides real-world scenarios that used mission command-written by the acting officers themselves.

Brig. General (Ret.) Gideon Avidor recruited to the I.D.F. in 1957 to the Armored Corps. He commanded Tank Company, Battalion, and Brigade. He participated in the Six-Day War as Tank Brigade G3; in the Yom Kippur war, he was the 252nd Division G3. During the Second Lebanon War, he was the Chief Armored Officer. He also commanded the School of Armor, was the DY Armor Corps Commander, the Israeli Defense Attach , and the Ministry of Defense representative to Singapore, Australia, Papua-New Guinea, New Zealand, and the Philippines. He graduated from the U.S. Army Command and General Staff College and the I.D.F. National Defense College. He holds a B.A. in History and an M.A. in Urban Geography.