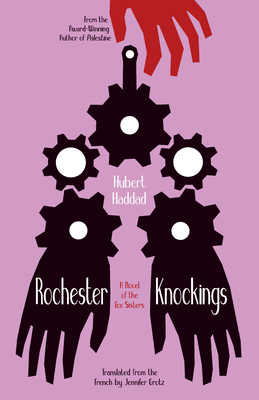 A Novel of the Fox Sisters

Hats off to one of the most inventive writers of French literature. . . . Hubert Haddad concocts a colorful novel, funny and inventive, as clever as the Fox sisters themselves.--Jean-Fran ois Delapr , Saint Christophe Bookstore

The Fox Sisters grew up outside of Rochester, NY, in a house with a reputation for being haunted, due to a series of strange knockings that plagued its inhabitants. Fed up with the sounds, the youngest of the sisters (aged twelve) challenged their ghost and ended up communicating with a spirit who had been murdered in the house and buried in the cellar.

The Fox Sisters became instantly famous for talking to the dead, launching the Spiritualist Movement. After taking Rochester by storm, they moved to New York where they were the most famous mediums of the time, performing's ances for hundreds of people--until it all fell apart. Yet, even today, the Fox Sisters are still considered to be the founders of one of the most popular religious movements in recent centuries.

Rich in historical detail, Rochester Knockings novelizes the rise and fall of these most infamous of mediums, and sheds a unique light on the impressionability and fragility of nineteenth-century America

Jennifer Grotz is the editor of Open Letter's poetry series, but is also a poet in her own right (The Needle, Cusp) and translates from French. Additionally, she is a professor of English, creative writing, and translation at the University of Rochester.