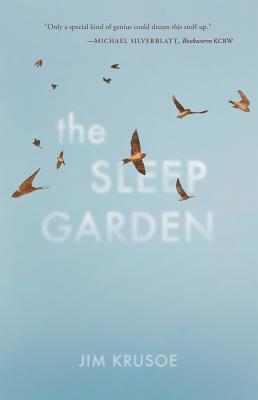 The Sleep Garden explores and pushes the boundaries between fact and imagination, real and surreal, and life and the afterlife.

In an underground apartment building called “the Burrow”--essentially purgatory—“twilight souls” inhabit the space between life and death. Interwoven with their stories are those of inhabitants of the living world: a retired sea captain, a psychotic former child actor (possibly the sea captain’s illegitimate son?), and the technicians who monitor the Burrow, making sure its occupants have a constant supply of oxygen and food. Through all of their stories, and the ways in which their lives, past and present, intertwine, Krusoe creates a poignant story about what constitutes a life, what remains when we die, and what we possibly carry with us into the next world.


Praise For The Sleep Garden…

Ultimately, Krusoe is a superb entertainer with a Mad magazine-like appreciation for the absurd. His is a vision that stretches and expands in unexpected ways, leaving no aspect of popular culture untouched (Grape Nuts, The Fly and Soviet literature make welcome appearances.) At his best, he is right up there with such death-in-life/life-in-death masters as the bewitching Jonathan Carroll (The Land of Laughs) and spritzing Stanley Elkin (The Living End). The afterlife has never been the same.

From one of our great deadpan absurdists—a new member of the club to which George Saunders, Robert Coover, and Stanley Elkin belong—comes a book of unearthly delights that will have you, too, wondering nervously what that incessant grinding sound is.

The Sleep Garden is the wry, warped purgatory as Möbius Strip. You follow along the rolling, open road and suddenly you’re upside down and backwards, staring at your own nether end. Sisyphean and webbed by permutations, the narrative ends just as the characters take charge of their lives. It's a brilliant, and poignant, rendering of white light.

— Laura Glen Louis, author of TALKING IN THE DARK

The Sleep Garden is Jim Krusoe's looniest and most satisfying book.  Inane and trivial questions are given close consideration, while questions of life and death (and the differences between life and death) are intimated and then suspended.

Only a special kind of genius (or an idiot savant, as the book suggests) could dream this stuff up.  I  have no idea how be does it, but do it he does, and no one else can blur stupidity and significance with such sublime, funny and human results.

"Jim Krusoe’s soulful characters inhabit an underground warren of apartments called The Burrow, but unlike Kafka’s menacing fable of that name, these twilight existences are benignly monitored by aboveground technicians. Gone is Kafka’s paranoia-inducing menace, and now for our delectation is Krusoe’s fractious and blackly comedic fable for our technology-entombed time. Jim Krusoe is Franz Kafka’s most brilliant literary descendant."

Jim Krusoe’s excellent The Sleep Garden offers a deceptively fragile, but surprisingly durable and elastic, mosaic of voices. The book’s inhabitants exist in that liminal space between life and afterlife, yes, but more so between the fostering of banal ambitions and the awakening of eternal regrets. It’s a brilliant wry comedy forever tilting toward tragedy—a dispatch from the dreamy edge of realism, as only Krusoe can tell it.