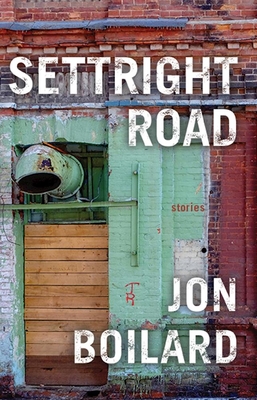 Settright Road is a collection of 20 short stories and one longer piece of fiction, all set in and around a string of busted Massachusetts mill towns during the cocaine-fueled 1980s. Its pages are colored by unforgettable characters: a teenage lothario whose plans to escape his one-horse town by hopping a train to California are monkey-wrenched when he impregnates a local girl from a prominent family; fresh-out-of-prison Sean Folan, who nearly kills a man in a bar fight just so he'll get locked up again; underage Bill Buick, who sells dope to hard-up townies and seduces high school girls, when he's not driving a wedge between his aunt and her new boyfriend; and Eskimo -- trouble in a too-tight dress -- a dancer and a poet whose unsavory relationship with a strip club owner comes to a tragic end when she falls in love with a notorious backwoods brawler. Jon Boilard lets loose these conflicted characters against a backdrop of the abject poverty that sits in stark contrast to the lush New England scenery; then he challenges us to root for these desperados despite the weight of their human errors.

Born and raised in Western Massachusetts, Jon Boilard has been living in Northern California since 1986. He is the author of two novels: The Castaway Lounge (Dzanc Books, 2015), and A River Closely Watched (MacAdam Cage, 2012), which was a finalist for the Northern California Book Award. His short stories have been published in literary journals in the United States, Canada, Europe and Asia. He lives in San Francisco, CA.
Loading...
or support indie stores by buying on