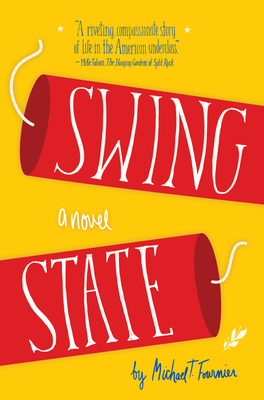 Swing State unveils the generally overlooked decades-long economic downturn in the rural Northeast. With an unflinching eye, novelist Michael T. Founier lays bare the dim dreams and raw existence of the lives of three residents of Armbrister, New Hampshire, who share the same goal: Get out. Faced with grim prospects, the intersection of bullying and terrorism blurs, with disastrous consequences in this deftly woven tale.

Michael T. Fournier is a writer/critic/musician, and the author of two novels: Hidden Wheel (Three Rooms Press, 2011) and Swing State (Three Rooms Press, 2014), as well as Double Nickels on the Dime (33 1/3/Continuum), a book-length discussion of the 1984 Minutemen album of the same name. He is founder and co-editor of Cabildo Quarterly, a broadsheet literary journal. His writing has appeared in the the Oxford American, Vice, Pitchfork, and the Boston Globe. He lives in Western Massachusetts with his wife Rebecca and their cat.
or support indie stores by buying on
Copyright © 2020 American Booksellers Association