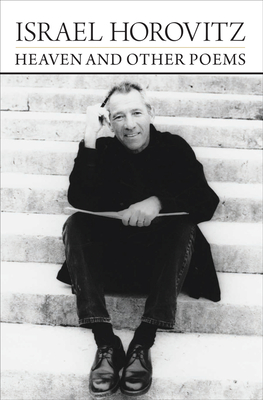 Heaven and Other Poems

With more than 70 produced plays and many produced screenplays, playwright/director/author Israel Horovitz presents a new dimension to his creative output in Heaven and Other Poems, the 75-year-old author's first-ever authorized poetry collection. A tour-de-force of emotion, empathy and deep, melancholic beauty, Heaven and Other Poems is a stunning collection of work crafted over a lifetime. From the epic poem Stations of the Cross with its startling, tenderly crafted images of familial love and loss, to the punchy and pointed aphorisms of the twin Defining the French Novel and Defining the American Novel Horovitz displays a remarkable range, and--throughout--a deep understanding of humanity. As the most-produced American playwright in French theatre history, Horovitz sets many of his in France, where he often directs French-language productions of his plays. The collection is filled with surprises and special gifts, such as the never-before-published translation of one of his poems by master playwright Samuel Beckett, from whom Horovitz found thematic and stylistic inspiration for his own work. A truly inspired poetry collection, which is, in turn, truly inspiring and fulfilling to its audience.

Playwright-screenwriter-director Israel Horovitz's 70+ stage-plays have been translated and performed in as many as 30 languages, worldwide. His plays have introduced such actors as Al Pacino, John Cazale, Jill Clayburgh, Marsha Mason, Gerard Depardieu, and many others. Best-known plays include Line (now in its 40th year, off-Broadway), The Indian Wants The Bronx, Park Your Car In Harvard Yard, My Old Lady, The Widow's Blind Date, It's Called The Sugar Plum, Rats, Morning, and The Primary English Class. Best-known films include Author! Author!, Sunshine (for which he won the European Academy Award - Best Screenplay), James Dean (which introduced James Franco), 3 Weeks After Paradise (which he wrote, directed and starred), and My Old Lady, which he recently adapted for the screen and directed (at age 74) starring Kevin Kline, Maggie Smith, and Kristin Scott-Thomas. Horovitz's memoires Un New-Yorkais a Paris were recently published in France, where he was decorated as Commandeur dans l'Ordre des Arts et des Lettres, and is the most-produced American playwright in French theatre history. He is the father of five children: film producer Rachael Horovitz, TV producer/novelist Matthew Horovitz, Beastie Boy/composer Adam Horovitz, writer/filmmaker Oliver Horovitz, and academic Hannah Horovitz. He is married to Gillian Horovitz, formerly England National Marathon Champion and record-holder. The Horovitz family divides its time among homes in NYC, Gloucester, Massachusetts, and London. Horovitz has written poetry throughout his lifetime. Heaven and Other Poems is the first collection of his poetry he has authorized for publication.
Loading...
or support indie stores by buying on