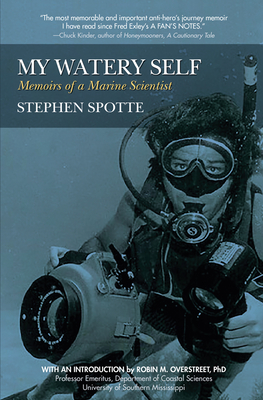 Memoirs of a Marine Scientist

In My Watery Self: An Aquatic Memoir, author/scientist Stephen Spotte traces a fascinating trail through a life that began in West Virgina coal camps, drifted through reckless bohemian times of countercultural indulgence in Beach Haven, New Jersey, and led to a career as a highly-respected marine biologist. Together, these stories form a view not just of one man's life, but that of a generation that often refused to take a direct path to the workplace, insisting instead on a winding unveiling of true self-realization, to achieve previously-unimagined outcomes. For Spotte, the key was water: His years of beach living led to a self-initiated study of literature and the sea. He eventually returned to college and received his training as a marine biologist, and discovered, through his singular voice, a wet and occasionally very weird perspective on the world. His writing is engrossing throughout, the stories he shares--such as his stint as curator of the New York Aquarium at Coney Island at the tail end of the hippie era--are compelling and thoroughly enjoyable as he elevates the people and situations he encounters to mythical levels, blending empirical observation with literary prose.

Stephen Spotte, a marine scientist, was born and raised in West Virginia. He has been a field biologist for the U.S. Army Corps of Engineers (Waterways Experiment Station, Vicksburg, Mississippi); curator and later director of Aquarium of Niagara Falls (New York); curator of the New York Aquarium and Osborn Laboratories of Marine Science (Brooklyn, New York); director of Mystic Aquarium (Mystic, Connecticut); executive director of Sea Research Foundation and research scientist at the Marine Sciences and Technology Center, University of Connecticut (Groton, Connecticut); principal investigator, Coral Reef Ecology Program (Turks and Caicos Islands, B.W.I.), and adjunct scientist at Mote Marine Laboratory (Sarasota, Florida). Dr. Spotte has a B.S. degree from Marshall University, a Ph.D. from the University of Southern Mississippi, and is author or coauthor of more than 80 scientific papers on marine biology, ocean chemistry and engineering, and aquaculture. Field research has encompassed the Canadian Arctic, Bering Sea, West Indies, Indo-West Pacific, Central America, and the Amazon basin of Ecuador and Brazil. He also holds a U.S. Merchant Marine officer's license.His popular articles about the sea have appeared in National Wildlife, On the Sound, Animal Kingdom, Explorers Journal, and Science Digest. Dr. Spotte has published 18 books, including three volumes of fiction, a memoir, and a work of cultural theory. He lives in Longboat Key, FL.
Loading...
or support indie stores by buying on