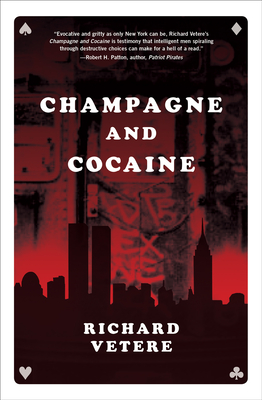 New York. Winter. 1980. Behind the glitter of the disco era, the city streets run wild. In countless secret spaces, high stakes poker games fuel an underground economy flush with cocaine, champagne, and call girls. Winners are on top of the world. But no one wins forever, and when aspiring novelist and inveterate card player Danny Ferraro goes all in--and then some--he winds up owing the mob big money. And when you owe the mob, you pay--or else. With nowhere to run, Danny is forced to commit unspeakable acts just to stay even. Richard Vetere's gritty novel strips the gloss of the Godfather era and lays bare the gritty reality of the subversive blackmarket as Ferraro struggles to free himself of its grip. Vetere (The Third Miracle, The Writers Afterlife) delivers his most riveting work to date, with page-turning action and an insider's view of a hidden culture.

Richard Vetere is a playwright, novelist, poet, screenwriter, TV writer and actor. He wrote the novels The Writers Afterlife (Three Rooms Press) and The Third Miracle (Simon & Schuster), which is now in several languages. He co-authored the screenplay adaptation for the movie produced by Frances Ford Coppola, starring Ed Harris. His plays, performed globally, include Machiavelli, Caravaggio, Gangster Apparel, The Marriage Fool and his Pulitzer-nominated One Shot, One Kill. He's a member of the Writer's Guild, the Author's Guild, Dramatist Guild, Poets & Writers and the NY Playwright's Lab. He holds a master's degree from Columbia University and teaches a master screenwriting class at NYU and Queens College. He lives in New York City.
Loading...
or support indie stores by buying on