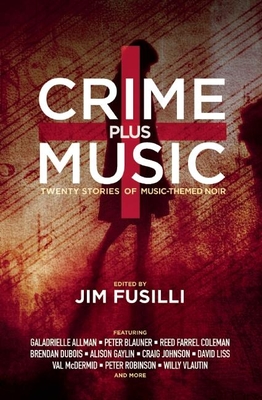 CRIME + MUSIC: The Sounds of Noir, collects twenty darkly intense, music-related noir stories by world-renowned mystery authors including David Corbett, Tyler Dilts, Brendan DuBois, Bill Fitzhugh, Alison Gaylin, A.J. Hartley, Craig Johnson, David Liss, Val McDermid, Gary Phillips, Peter Robinson, and Zo Sharp, and, from the music world, Galadrielle Allman, author of Please Be With Me: A Song for My Father, Duane Allman and award-winning songwriter-novelist Willy Vlautin. Edited by novelist and Wall Street Journal rock and pop music critic Jim Fusilli. The lively anthology's chilling, sinister tales tap into the span of rock and pop history, ranging from Peter Blauner's heart-wrenching "The Last Temptation of Frankie Lymon" to Fusilli's "Boy Wonder," set in the world of contemporary electronic dance music; from Naomi Rand's "The Misfits," a punk-rock revenge saga to Mark Haskell Smith's menacingly comedic "1968 Pelham Blue SG Jr."; from Reed Farrel Coleman's study of a one-hit wonder, "Look at Me/Don't Look at Me" to Erica Wright's account of betrayal among minor talents in "A Place You're Likely to Find"--and many more. CRIME + MUSIC exposes the nasty side of the world of popular music, revealing it to be the perfect setting for noir tales.

Jim Fusilli is the author of eight novels. He also serves as the rock and pop music critic of The Wall Street Journal and is the founder of ReNewMusic.net, a music website for grownups. He lives in New York City. Craig Johnson is a award-winning, NY Times Bestselling author, best known for his Walt Longmire mystery series, which has garnered popular and critical acclaim, and was adapted for a TV series on A&E. He lives in Ucross, WY. David Liss is a bestselling American novels and essayist, best known for his historical-mystery work including the Edgar Award-winning A Conspiracy of Paper, A Spectacle of Corruption, and The Whiskey Rebels. He lives in San Antonio. Val McDermid is a Scottish crime writer, best known for a series of suspense novels featuring Dr. Tony Hill. She lives in Kirkcaldy, Fife, Scotland. Alison Gaylin is the author of the Edgar-nominated thriller Hide Your Eyes and its sequel, You Kill Me; the standalones Trashed and Heartless; and the Brenna Spector series: And She Was (winner of the Shamus Award), Into the Dark, and the Edgar-nominated Stay with Me. She lives in Woodstock, NY.
Loading...
or support indie stores by buying on