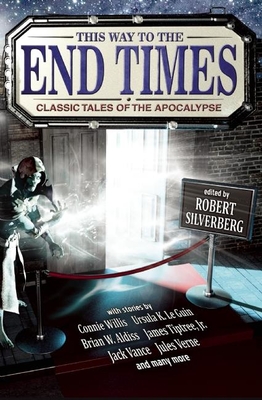 This Way to the End Times

Classic Tales of the Apocalypse

Robert Silverberg, editor and contributor, is one of science fiction's most beloved writers, and the author of such contemporary classics as Dying Inside, Downward to the Earth and Lord Valentine's Castle, as well as At Winter's End. He is a past president of the Science Fiction and Fantasy Writers of America and the winner of five Nebula Awards and five Hugo Awards. In 2004 the Science Fiction and Fantasy Writers of America presented him with the Grand Master Award. Silverberg is one of twenty-nine writers to have received that distinction. Ursula K. Le Guin, contributor, is an American author of novels, children's books, and short storiHer work has often depicted futuristic or imaginary alternative worlds in politics, the natural environment, gender, religion, sexuality and ethnography. Connie Willis, contributor, is an American science fiction/fantasy writer. She has won eleven Hugo Awards and seven Nebula Awards--more major award than any other writer. She was inducted into the Science Fiction Hall of Fame, and is a SFWA Grand Master. Her novels include Doomsday Book, To Say Nothing of the Dog. Megan Arkenberg, contributor, is an award-winning writer of science fiction, fantasy, and horror. Her work has appeared in over fifty publications and in anthologies such as The Apocalypse Triptych, Heiresses of Russ, and The Best Horror of the Year. She lives in Davis, CA. Brian W. Aldiss, contributor, is an English writer and anthologies editor, best known for his short story "Super-Toys Last All Sumer Long," the basis for the Stanley Kubrick-developed Steven Spielberg film "A.I. Artificial Intelligence." He has two Hugo Awards and one Nebula Award, and is a Sci-Fi Grand Master.
Loading...
or support indie stores by buying on