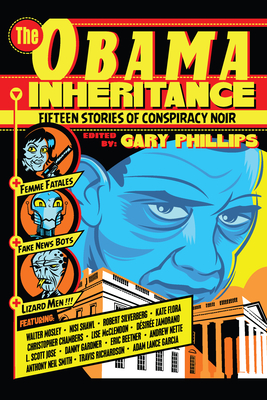 Winner, 2018 Anthony Award for Best Anthology and Winner, Bronze Medal, 2017 Indie Book Awards for Anthologies, Foreword Reviews. Noir meets diverse voices and transforms the genre into an over-the-top, transcendental psychedelic thriller ride of pulpy goodness in THE OBAMA INHERITANCE, a collection of fifteen stories of conspiracy noir curated by editor and award-winning African-American crime novelist Gary Phillips. In the tradition of satirical works of Swift and Twain, with nods to the likes of William Burroughs, Asimov and Philip K. Dick, these tales contain vigilante First Ladies, Supreme Court judges who can clone themselves, gear-popping robots of doom, and races of ancient lizard people revealing their true master plan ... and these are just the tame ones mashed up in the blender of fake news bots, climate change is but a hoax by the Chinese and humans roamed with dinosaurs. In an era where the outlandish and fantastic has permeated our media 24/7, where mind-bending conspiracy theories shape our views, THE OBAMA INHERITANCE writers riff on the numerous fictions spun about the 44th president of the U.S. Although Obama himself does not appear in most of these stories, contributors spin deliberately outlandish and fantastic twists on many of the dozens of screwball, bizarro conspiracy theories floated about the president during his years in office and turn them on their heads. THE OBAMA INHERITANCE editor Gary Phillips is a critically acclaimed author of mystery and graphic novels (Peepland, Violent Spring, and Warlord of Willow Ridge). Raised in South Central Los Angeles, Phillips draws on his experiences from anti-police abuse community organizing and anti-apartheid activism. He was the chair of the Eleanor Taylor Bland Crime Fiction Writers of Color committee, and is president of the Private Eye Writers of America. Contributors include famed crime-detective author and essayist Walter Mosley, professor and former Department of Justice attorney Christopher Chambers (Sympathy for the Devil), noir raconteur Andrew Nette, actor and novelist Danny Gardner (A Negro and an Ofay), former Maine assistant attorney general Kate Flora (Death in Paradise), award-winning playwright and novelist D sir e Zamorano, and the Science Fiction Writers of America Grand Master Robert Silverberg.

Editor Gary Phillips is a critically acclaimed author of mystery and graphic novels (The Darker Mask, Bangers, Violent Spring). Raised in South Central Los Angeles, Phillips draws on his experiences from anti-police abuse community organizing and anti-apartheid activism in his work. He was the chair of the Eleanor Taylor Bland Crime Fiction Writers of Color committee, and was president of the Private Eye Writers of America
Loading...
or support indie stores by buying on