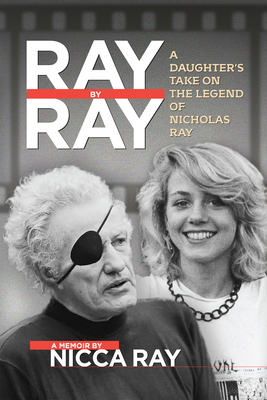 A Daughter's Take on the Legend of Nicholas Ray

Nicholas Ray was cinema. The legendary director of such classic films as Rebel Without a Cause was an innovative force who dramatically changed the Hollywood landscape. He was also Nicca Ray's dad, Nick.

After he disappeared from her life in 1964, Nicca began to imagine her father as a hero who would return and whisk her away from a life in LA where she never felt safe. However, the man who finally reappeared was not the legendary figure she dreamed of. Through his movies and letters along with her intimate interviews of family members and Hollywood icons, Nicca stitches together the seemingly disparate pieces of the real Nicholas Ray: A man so devoted to his craft he insisted on spending the last hours of his life surrounded by a film crew; a man who lost everything to drugs and gambling; an absentee father she longed to connect with.

Both well-researched and deeply personal, Ray by Ray: A Daughter's Take on the Legend of Nicholas Ray unravels the lives entangled in Nick's, including those of Gloria Grahame, Dennis Hopper, John Houseman, and the Ray family itself. Nicca tracks her father's whereabouts during the years he was missing from her life and works to reconcile his artistry with his persona. In discovering the truth about her father, she navigates her own path beyond the shadows cast by the Golden Age of Hollywood.

An essential new perspective on Nicholas Ray, with more than 50 photos and letters from the author's personal archive, Ray by Ray redefines this legendary figure through the eyes of a daughter searching for the truth about her father.

Nicca Ray was raised in Los Angeles, not far from where scenes from her father's most famous film, Rebel Without a Cause, were shot. In her early teen years, she became heavily involved in the L.A. punk scene, and spent a decade mimicking her father through drug and alcohol abuse. After becoming sober in her early twenties, she moved to New York City, where she still lives. At 38, she graduated from New School University, writing and directing two films, and creating and staging several plays. She has spent the years since researching and interviewing friends and family of her father, including Wim Wenders, Dennis Hopper, Norman Lloyd, Tony Ray, and many more. Her research is the basis of Ray by Ray.
Loading...
or support indie stores by buying on