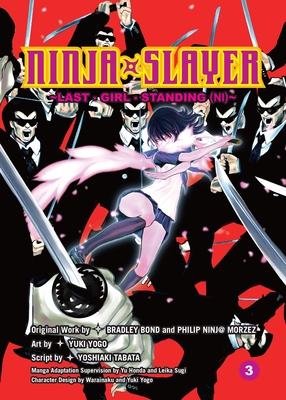 A rogue ninja fights criminals and other ninjas to maintain order in this lawless region of Japan.

The third volume of Ninja Slayer features two stories: Last Girl Standing and New Messenger. Last Girl Standing, one of the longer Ninja Slayer tales, details the friendship of two high school girls in the violent world of Neo-Saitama. Yamato Koki has to accept the ninja within her and take on all warriors before her, leading her toward a series of battles against yakuza clones, ninja video gamers, ninja hip-hoppers . . . and ultimately a ramen-eating Ninja Slayer!