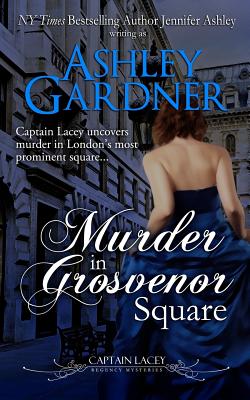 Captain Gabriel Lacey begins Spring 1818 preparing for a duel. But while he focuses on the affair of honor, darkness, greed, and death stalk the streets of London and bring tragedy to a family Lacey has grown close to. With the aid of Lucius Grenville, London's most famous dandy, and Brewster, a ruffian employed by an underworld criminal, Lacey's investigation takes him from the elegant mansions of Grosvenor Square to the squalid lanes of Seven Dials, to houses that practice a highly illegal trade, spelling ruin and possible hanging for those caught within. Lacey once again comes into the sphere of James Denis, a crime lord, when what appears to be a simple crime of hatred turns out to be far more complex. Book 9 of the Captain Lacey Regency Mysteries.

Award-winning Ashley Gardner is a pseudonym for New York Times bestselling author Jennifer Ashley. Under both names-and a third, Allyson James-Ashley has written more than 75 published novels and novellas in mystery and romance. Her books have won several RT BookReviews Reviewers Choice awards (including Best Historical Mystery for The Sudbury School Murders), and Romance Writers of America's RITA (given for the best romance novels and novellas of the year). Ashley's books have been translated into a dozen different languages and have earned starred reviews in Booklist. More about the Captain Lacey series can be found at www.gardnermysteries.com. Or email Ashley Gardner at gardnermysteries@cox.net
Loading...
or
Not Currently Available for Direct Purchase