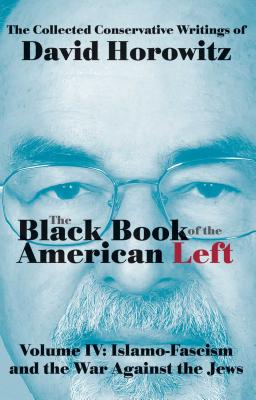 The Black Book of the American Left Volume 4

Islamo-Fascism and the War Against the Jews

The basic facts of David Horowitz's political odyssey are well known. A "Red diaper baby" who grew up in what he has called the ghetto of communism, he became a leading Marxist "theorist" in the early sixties and one of the godfathers of the New Left. But following America's defeat in the Vietnam, Horowitz began to reevaluate the damage those commitments had done to the country.
In Volume four, Horowitz focuses on two interlocked issues. The First is the Islamic totalitarianism in America, particularly as it manifests itself on our college campuses. The Second part of this volume takes up the war waged against the U.S. and Israel and Jews in general by Hamas, Hezbollah and other groups. In addition to analyzing their bloodthirsty ideology, Horowitz shows how the genocidal cause of these groups has been taken up by campus radicals. In describing his own confrontations with radical Muslims on our campuses, Horowitz gives a sobering insight into how Islamists have become an increasingly powerful within.

DAVID HOROWITZ is a noted chronicler and opponent of the American Left, a conservative commentator, and a bestselling author. He is the founder and CEO of the David Horowitz Freedom Center in Los Angeles and the author of Radical Son, The Black Book of the American Left, and The Enemy Within.
Loading...
or
Not Currently Available for Direct Purchase