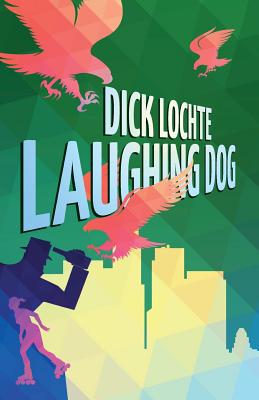 LAUGHING DOG "Sensational writing, mordant wit, an intricate crime puzzle..."
Harlan Ellison Hardboiled private eye Leo Bloodworth and his self-appointed partner, fifteen-year-old Serendipity Dahlquist, are back in a wild and deadly new mystery that's every bit as brilliant and memorable as SLEEPING DOG, a New York Times Book of the Year, a Nero Wolfe Award winner, and a finalist for the Edgar, Shamus and Anthony Awards. "Dancingly macabre, packed with perils, pungent with humor."
The Sunday Times (London) This time, Leo and Serendipity are on the trail of a teenage runaway and missing pair of sapphire earring, two seemingly separate, increasingly dangerous cases rife with gang members, designer drugs, killer birds, DIY plastic surgery...and a terrorist plot that could plunge sunny Southern California into a permanent nuclear winter. "An intelligent, playful, knowledgeable writer... Lochte has a great gift for the grotesquerie." Los Angeles Times "Deliciously humorous and touching." Publishers Weekly.

The Nero Wolfe Award Winner, Shamus Award Nominee, Edgar Award Nominee Author of a New York Times Book of the Year, author of one of the 100 Favorite Mysteries of the Century chosen by the Independent Mystery Booksellers Association Dick Lochte burst onto the crime-writing scene with Sleeping Dog and has continued to take the genre by storm ever since, becoming a Los Angeles Times bestselling author of 10 books of crime fiction and earning the highest honors a writer can attain in the mystery genre. Sleeping Dog chronicles the adventures of a precocious 14-year-old girl and a weary Los Angeles private detective as they search for the girl's mother across California. It has become one of the most acclaimed crime novels ever. Lochte's detective masterpiece was nominated for the Edgar, Shamus and Anthony Awards and took home the Nero Wolfe Award. It was also named a New York Times a "Notable Book of the Year" and was selected by the Independent Mystery Booksellers of America as one of the 100 Most Popular Mystery Novels of the Century. Fans and critics alike were equally excited and impressed by the thrilling sequel, Laughing Dog. Both novels are published by Brash Books, along with his terrific short story Rappin' Dog. Lochte's many other popular crime novels, including his Terry Manion series and his Billy Blessing mysteries written with Al Roker, are every bit as masterful. His novel Blue In the Night was named one of the top five crime novels of the year by the Private Eye Writers of America. He's not just a crime fiction author, either. Lochte is also a successful screenwriter, penning scripts for actors like Jodie Foster and Roger Moore, and he is a highly respected mystery critic and historian, whose many reviews and commentaries have appeared in the Los Angeles Times, Mystery Scene, and other publications. Be sure to look for his insightful commentary and reviews on the Brash Books blog.
Loading...
or support indie stores by buying on