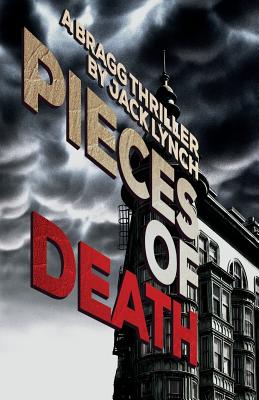 PIECES OF DEATH The Shamus Award-nominated, action-packed third thriller in the Bragg series of private eye novels that propelled author Jack Lynch into the league of detective fiction legends alongside Sue Grafton, Raymond Chandler, Robert B. Parker, Dashiell Hammett, and Ross MacDonald. "Bragg is authentic, gripping, gritty." San Francisco Examiner Peter Bragg goes to San Francisco International Airport to protect a man arriving with a valuable package and ends up in a brutal gun battle with two ruthless and brazen assassins. When the smoke clears, the traveler is a corpse and his package has disappeared...Bragg doesn't have it and neither do the killers. Bragg becomes the hunter and the hunted as killers descend on the city to find thirty-two gem-encrusted chess pieces smuggled out of China that are worth a staggering fortune...one somebody is willing to step over a pile of bodies to have for himself...if he can get past Bragg first. "This is a first-rate series. Bragg is a restrained and believable hero. The action scenes are excellent." 101 Knights: A Survey of American Detective Fiction "The books are damn good, featuring a hard but believable hero," The Thrilling Detective.