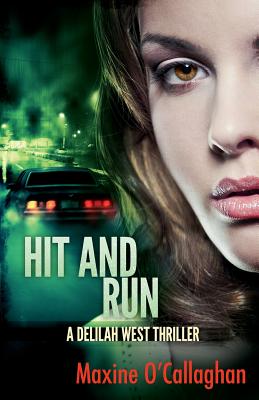 The PI business has been hard on Delilah West over the last year. Her husband and business partner was murdered and her last case left her with a broken arm, cracked ribs, and big medical bills, forcing her to moonlight as a waitress to pay the bills. As if that wasn't bad enough, she's jogging on a rain-slicked road when a speeding Trans Am clips her and mows down an old man. But things take a bizarre turn when the driver's mother hires Delilah to clear her teenage son of the hit & run killing that Delilah witnessed. Or did she? Nothing is what it appears to be in a twisty, deadly case, that could end with Delilah as road kill.

Maxine O'Callaghan was born in Tennessee in 1937 and grew up in the boot heel of Missouri as a sharecropper's child. She was the first in her large extended family to finish high school and left a few days after graduation with ten dollars and a bus ticket for Memphis. She went from there to Miami where she joined the Marine Corp Reserve and then to Chicago where she went on active duty for a while and got her first taste of California during basic training at the Recruit Depot in San Diego. In 1972 she moved with her husband and two children to Orange County, CA, a long way from the cotton fields of her childhood. As a stay-at-home mom she began her writing career with short stories, including one to Alfred Hitchcock's Mystery Magazine about a private detective named Delilah West, which predates both Marcia Muller and Sue Grafton's entry into the female PI genre. She published thirteen novels and a collection of short stories. She has been nominated for both the Anthony and Bram Stoker award. Her novels and short fiction featuring Delilah West were honored by the Private Eye Writers of America with their lifetime achievement award, The Eye, for her contribution to the field.
Loading...
or support indie stores by buying on