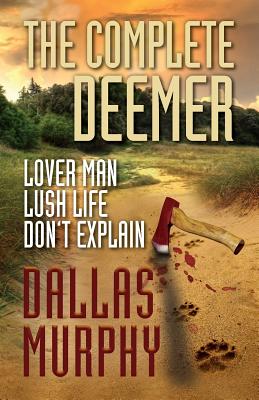 ALL THREE OF DALLAS MURPHY'S ARTIE DEEMER NOVELS IN ONE VOLUME
"Artie Deemer is a true original - the frantic, antic humor carries along the characterization and narration like twin, runaway trains," Chicago Sun Times
Artie Deemer lives off his dog Jellyroll, star of movies TV and dog food advertising. In the Edgar-Award finalist Lover Man, Artie becomes a reluctant detective when his ex-girlfriend is killed.
"The writing is flip and sophisticated," New York Times
In Lush Life, Artie falls for a sexy pool player whose sleazy ex-husband has disappeared with $14 million of his company's assets. Now Artie finds himself in the middle of wild caper involving the mob and the CIA.
"A bouncy, quirky, funny mystery...more twists and turns than a New York cab driver running up the meter," Washington Post
In Don't Explain, Jellyroll has become the target of death threats from crazed stalkers, so Artie takes him to a remote island, only to discover their hideaway is overrun with an assortment of colorful killers.
"An outstanding series," Publishers Weekly.