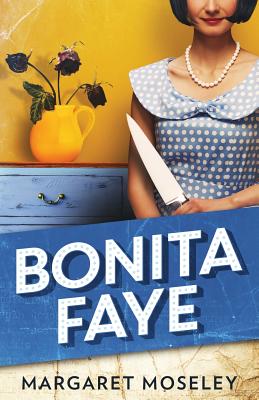 Margaret Moseley's colorful and unforgettable Edgar Award-finalist that captures Fannie Flagg's homespun charm and Janet Evanovich's laugh out loud humor. When small town girl Bonita Faye's abusive husband, car salesman and fishing guide Billy Roy is killed, she begins an adventurous new life that takes her from Poteau, Oklahoma to Paris and back again in a story of murder and redemption...and more murder... stretching over three decades. "Bonita Faye is one of the funniest, most resourceful and optimistic fictional heroines you'll ever come across." Dallas Morning News "Bonita Faye is the Eliza Doolittle of the dust bowl." Associated Press "Poignant, humorous, captivating...a startlingly fresh voice and a literary original you'll want to share with friends." Tulsa World.

Margaret Moseley has been making her living as a writer since she was eighteen, beginning on the original Fort Worth Press in Fort Worth, Texas and continuing with work for ad agencies, television, and major corporations. Her stunningly original first book, Bonita Faye, was a finalist in the Edgar Award for Best New Novel by an American Writer and earned her wide, and richly deserved, acclaim. Moseley was born in Durant, Oklahoma, raised in Fort Worth, Texas and for twenty years lived in Fort Smith, Arkansas. During her time in Arkansas, she was a personal friend of the Clintons and campaigned for them as an Arkansas Traveler at the time of the 1992 election. She is the author of five mystery novels Bonita Faye, Milicent LeSueur, The Fourth Steven, Grinning in His Mashed Potatoes, and A Little Traveling Music Please, all of which are being republished by Brash Books, starting in early 2015. Moseley is married to computer guru and novelist Ron Burris. They live in Euless, Texas, with their rescued beagles Miss Sadie and Miss (The Terror) Matilda.
Loading...
or support indie stores by buying on