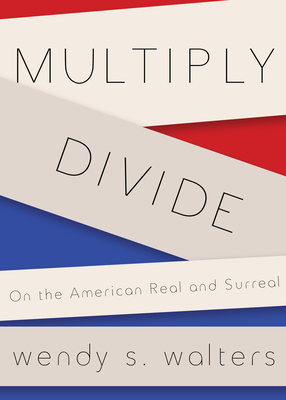 On the American Real and Surreal

“In Multiply/Divide, Walters sifts through the weird, quietly horrifying wreckage that structural racism has left behind in everyday American life and presents something like a mythology, but stranger because, of course, it is real, and we have never known life without it. Her prose is as clear as day, her stories are candid, and only a poet could have written a book of essays like this. City by city, over radio waves and under the street, Walters beautifully maps for us what should have been obvious: that nearly all of our heartbreak -- and even our joy -- is rooted in this mythology.”
— Daniel Poppick (W), BookCourt, Brooklyn, NY
View the List

In the manner of Calvino's Invisible Cities, Wendy S. Walters's essays deftly explore the psyches of cities such as Chicago, Detroit, New York, Portsmouth, and Washington, D.C. In Cleveland, she interviews an African-American playwright who draws great reviews, but can't muster an audience. An on-air telephone chat between a DJ and his listeners drives a discussion of race and nutrition in Chicago Radio. In Manhattanville the author, out for a walk with her biracial son, is mistaken for his nanny. Each essay explores societal questions--how eras of immense growth can leave us unable to prosper from that growth, how places intended for safety become fraught with danger, and how race and gender bias threaten our communities. Walters's haunting utterances are beautifully precise estimations of a place and its people.

Wendy S. Walters: Wendy S. Walters is the author of two books of poems, Troy, Michigan and Longer I Wait, More You Love Me. Her work has appeared in Harper's, Bookforum, The Iowa Review, and others. She is Associate Professor of creative writing at The New School University in New York.
Loading...
or support indie stores by buying on