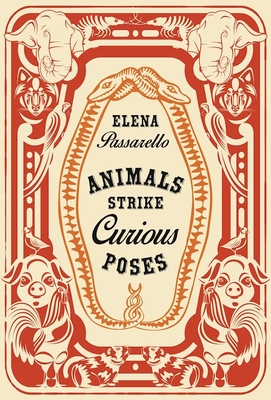 Elena Passarello is an actor, a writer, and recipient of a 2015 Whiting Fellowship in nonfiction. Her first collection with Sarabande Books, Let Me Clear My Throat, won the gold medal for nonfiction at the 2013 Independent Publisher Awards. She lives in Corvallis, Oregon.

Elena Passarello is an actor, a writer, and recipient of a 2015 Whiting Award. Her first collection with Sarabande Books, Let Me Clear My Throat, won the gold medal for nonfiction at the 2013 Independent Publisher Awards and was a finalist for the 2014 Oregon Book Award. Her essays on performance, pop culture, and the natural world have been published in Oxford American, Slate, Creative Nonfiction, and The Iowa Review, among other publications, as well as in the 2015 anthologies Cat is Art Spelled Wrong and After Montaigne: Contemporary Essayists Cover the Essay. Passarello lives in Corvallis, Oregon and teaches at Oregon State University.

1. The essays in this collection are ordered chronologically and span roughly 39,000 years. Each one describes a different human relationship with an animal (or animals). As you read the collection, do you get the sense that humans have changed in the way they interact with animals over time? If so, how? If not, why?

2. In “Harriet”, Passarello incorporates the tools of fiction alongside historical research as she writes from the imagined perspective of Darwin’s tortoise Harriet. Why do you think she made that choice? How does this impact the way you read the essay?

3. Passarello uses a variety of prose styles throughout the collection. Consider the effect of rhythm and sound in an essay like “Sackerson” by reading a passage aloud. How does Passarello’s writing style contribute to the subjects and themes of her essays?

4. In “Jumbo II,” Passarello juxtaposes the history of circus elephants with the history of electrocution. What argument might she be making through this juxtaposition?

5. All of the essays in Animals Strike Curious Poses feature animals that were named by humans. How does the act of naming alter the relationship between humans and the animals they name?

6. “Lancelot” is the only essay in the collection in which the author discusses her own life. In it, she describes a formative childhood memory: going to the circus to see the creature falsely billed as ‘The Living Unicorn.’ ”There’s a distinct possibility that every time I write about an animal, I’m only writing about him,” Passarello writes, “which might also mean, horrifyingly, that I’m only writing about myself.” Consider this quote in the context of the collection. Do you think Passarello is really just writing about herself, or more broadly, the human animal? If so, what is she trying to say?

7. Harambe was a 17-year-old Western lowland gorilla kept at the Cincinnati Zoo. In 2016, a three-year-old boy climbed into Harambe’s enclosure. The zoo staff, fearing for the boy’s life, shot and killed the gorilla. What might the Passarello essay “Harambe” look like?