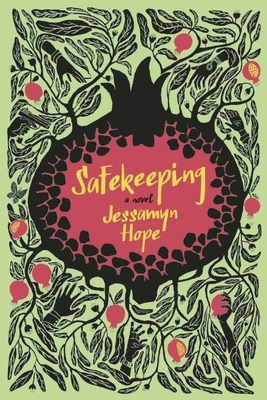 A dazzling debut novel about love, loss, and the courage it takes to start over. It's 1994 and Adam, a drug addict from New York City, arrives at a kibbutz in Israel with a medieval sapphire brooch. To redress a past crime, he must give the priceless heirloom to a woman his grandfather loved when he was a Holocaust refugee on the kibbutz fifty years earlier. But first, he has to track this mystery woman down--a task that proves more complicated than expected. On the kibbutz Adam joins other lost souls: Ulya, the ambitious and beautiful Soviet migr e; Farid, the lovelorn Palestinian farmhand; Claudette, the French Canadian Catholic with OCD; Ofir, the Israeli teenager wounded in a bus bombing; and Ziva, the old Socialist Zionist firebrand who founded the kibbutz. Driven together by love, hostility, hope, and fear, their fates become forever entangled as they each get one last shot at redemption. In the middle of that fateful summer glows the magnificent brooch with its perilous history spanning three continents and seven centuries. With insight and beauty, Safekeeping tackles that most human of questions: How can we expect to find meaning and happiness when we know that nothing lasts?

“Luminous, irreverent, and ambitious....Full of romance, tragedy, betrayal, and the constant reminder that chaos is a driving force in everyone’s story, Safekeeping is a wise and memorable debut by a novelist of great talent and originality.” — The Boston Globe

“A book that is greater than the sum of its parts. A complex, beautiful story about the inheritance of Jewish history.” — The Globe and Mail

"One of the most assured debut novels in years....It's a page-turner that satisfies all the cravings of escapist reading while meeting the real world head-on." — The Montreal Gazette

“This beautiful story of loss and hope sweeps artfully through 600 years of Jewish resilience. With its richly drawn, believable characters and its great sensitivity, Hope’s novel is a striking debut.” — Booklist

“When a debut novel comes along and dares just enough and hits the right notes, it deserves our attention.” — Tablet Magazine

“This emotional journey will leave readers with aching hearts and deepened empathy for the waifs and strays of our world.” — Shelf Awareness (starred review)

“An intricate tapestry of love and longing, failure and redemption. Not every character will be saved but readers will keep rooting for them.” — Library Journal

"[Jessamyn Hope] may be a first-time author, but she’s already a master storyteller." — Washington Jewish Week

One of The Boston Globe's "Suggested Summer Reads" for 2015.

Finalist for the 2016 Paterson Fiction Prize

Safekeeping is Jessamyn Hope's debut novel. Her fiction and memoirs have appeared in Ploughshares, Five Points, Colorado Review, Descant, and PRISM international, among other literary magazines. She was the Susannah McCorkle Scholar in Fiction at the 2012 Sewanee Writers Conference and has an MFA from Sarah Lawrence College. Originally from Montreal, Hope lived in Israel before moving to New York City. Learn more at jessamynhope.com.
Loading...
or support indie stores by buying on