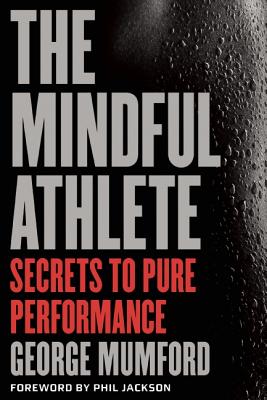 “George helped me understand the art of mindfulness. To be neither distracted or focused, rigid or flexible, passive or aggressive. I learned just to be." —Kobe Bryant

Michael Jordan credits George Mumford with transforming his on-court leadership of the Bulls, helping Jordan lead the team to six NBA championships. Mumford also helped Kobe Bryant, Andrew Bynum, and Lamar Odom and countless other NBA players turn around their games. A widely respected public speaker and coach, Mumford is sharing his own story and the strategies that have made these athletes into stars in The Mindful Athlete: The Secret to Pure Performance. His proven, gentle but groundbreaking mindfulness techniques can transform the performance of anyone with a goal, be they an Olympian, weekend warrior, executive, hacker, or artist.

When Michael Jordan left the Chicago Bulls to play baseball in 1993, the team was in crisis. Coach Phil Jackson, a long-time mindfulness practitioner, contacted Dr. Kabat-Zinn to find someone who could teach mindfulness techniques to the struggling team—someone who would have credibility and could speak the language of his players. Kabat-Zinn led Jackson to Mumford and their partnership began. Mumford has worked with Jackson and each of the eleven teams he coached to become NBA champions. His roster of champion clients has since blossomed way beyond basketball to include corporate executives, Olympians, and athletes in many different sports.

With a charismatic teaching style that combines techniques of engaged mindfulness with lessons from popular culture icons such as Yoda, Indiana Jones, and Bruce Lee, Mumford tells illuminating stories about his larger than life clients. His writing is down-to-earth and easy to understand and apply. The Mindful Athlete is an engrossing story and an invaluable resource for anyone looking to elevate their game, no matter what the pursuit, and includes a foreword by Phil Jackson.

"Self-consciousness is when you’re focused on how you’re doing instead of what you’re doing. We have to learn how to push and challenge ourselves, but not in an insensitive way. Honing your performance really comes down to being comfortable with being uncomfortable."—George Mumford

Praise For The Mindful Athlete: Secrets to Pure Performance…

“George helped me understand the art of mindfulness. To be neither distracted or focused, rigid or flexible, passive or aggressive. I learned just to be."
—Kobe Bryant, 5-time NBA champion, Los Angeles Lakers

"George has ‘Mumfied' the teams I've coached over the past 20 years. He has a style of mindfulness that goes beyond 'just sitting/breathing' to focusing while in action. For anyone needing to perform at the highest level, this book is for you."
—Phil Jackson, 13-time NBA champion

"The one thing that Shaquille O'Neal and Kobe Bryant could agree upon was that George Mumford was their secret weapon, the trusted advisor who brought clarity to their competitive minds. I know this because they told me personally. Mumford's The Mindful Athlete brings to the reader the special insight that the world's greatest athletes—from Michael Jordan to Scottie Pippen, from Shaq to Kobe—came to treasure. I, too, agree with them. Listening to George Mumford made me a better writer, a better thinker. Mumford has a gift, and now, he's sharing it in this special book. It's a treasure."
—Roland Lazenby, Michael Jordan, The Life

“A truly valuable, unique, and inspiring door into the cultivation of mind/body unity and purpose.  George’s love of basketball and of life comes through on every page and shapes his remarkable story and the enormous impact he has had at the highest levels of The Game. But George's real message here is that anybody can cultivate mindfulness through on-going practice, fine-tune his or her way of being, and thus, take care of what most needs taking care of and do what most needs to be done."
—Jon Kabat-Zinn, Full Catastrophe Living and Mindfulness for Beginners

“George Mumford’s insight into mindful performance has helped many word-class athletes reach their true and full potential. This engaging book will help you to lower your stress level and raise the bar in your own game and life.”
—Jim Afremow, PhD, The Champion’s Mind

"Full of wisdom and heart, both a moving story and powerful practices from a very fine teacher. George Mumford shows how to find freedom in a game fully played and a life well lived."
—Jack Kornfield, A Path with Heart

“George Mumford has written a fantastic book—inspiring, funny, and insightful. I'm amongst the people who have urged George for years to write a book, and I couldn't be happier for him, and all of us who get to read it and reread it. Qualities like mindfulness, concentration, trust and the forging of a team spirit really come alive.“
—Sharon Salzberg, Real Happiness and Real Happiness at Work

George Mumford currently works with coach Phil Jackson and has consulted on each of the NBA championship teams Jackson coached. He’s also consulted with high school, college, and Olympic athletes, inmates, and corporate executives, and he is a sought-after public speaker at both business and athletic conferences, nationally and internationally. He lives in Massachusetts.

A member of the basketball Hall of Fame, Phil Jackson is considered by many to be the greatest coach in the history of the NBA. He was head coach of the Chicago Bulls and the Los Angeles Lakers and holds the record for the most championship wins as a player and a coach. Jackson currently serves as President of the New York Knicks.
Loading...
or
Not Currently Available for Direct Purchase