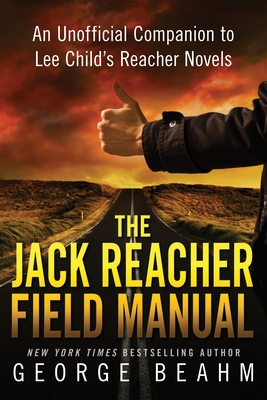 In The Jack Reacher Field Manual: An Unofficial Companion to Lee Child's Reacher Novels, from ex-Army major and New York Times bestselling author George Beahm, get up-close and personal with Reacher like never before.

The only book of its kind, the Field Manual draws on 17 years of interviews, novels, stories, and more to demystify author Lee Child's larger-than-life, name-taking, quick-thinking one-man avenger. Child calls the Reacher novels "almost entirely autobiographical," and The Jack Reacher Field Manual seamlessly integrates the literary creator and his creation to provide the most complete portrait of Jack Reacher available.

Dive into Jack Reacher's life with:
- A detailed dossier on Reacher and his life at West Point and in the Army's Military Police Corps
- Reacher's rules of engagement, including how he handles a street brawl
- A full-color drifter's roadmap of the US, detailing the places Reacher has visited in the novels
- Reacher's philosophy for surviving under the radar
- A biography on Child and an A-to-Z list of the key people, places, and things in his life
- And more, including a glossary of US Army acronyms that appear in the series and a comprehensive reading list of Reacher novels, novellas, and stories

The Jack Reacher Field Manual belongs in the fatigue jacket of any fan craving more information about this internationally popular literary antihero.

A former Army major with a top secret clearance who served on active duty, in the National Guard, and in the Army Reserve, George Beahm is the author of dozens of non-fiction books on popular culture and several business titles.

Published worldwide in 22 languages, Beahm's books have appeared on the bestseller lists of the New York Times, Publishers Weekly, USA Today, and LA Times.
Loading...
or
Not Currently Available for Direct Purchase