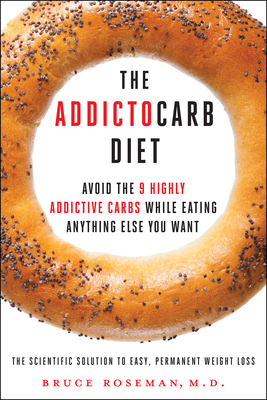 There's a reason diets don't work. Science has shown that a class of carbohydrates, called "Addictocarbs," light up the brain's pleasure and addiction centers and make it almost impossible to eat them in moderation. If you've experienced overwhelming, irresistible cravings for things like bread, cookies, soda, or potatoes, then you've encountered these Addictocarbs firsthand. If you're struggling to lose weight, counting calories and shrinking portions are not the answers. The answer lies in how your brain reacts when you eat these Addictocarbs--and how you can use this knowledge to help you break the addictive cycle. It's called the Addictocarb Diet, and it's a cure--not a fad. After losing his father at an early age to obesity-related illness and a lifetime of struggling with his own weight and diabetes as a result, Bruce Roseman, M.D., transformed his life and the lives of close to a thousand of his patients with this simple and effective diet based on the latest findings in addiction neuroscience. The Addictocarb Diet: Avoid the 9 Highly Addictive Carbs While Eating Anything Else You Want explains that weight gain stems from our addiction to these nine carbs, proven by new brain imaging techniques from the emerging field of addiction neuroscience. Unlike fad diets, the Addictocarb Diet not only helps you easily lose weight and keep it off, but also improves your overall health and can be beneficial for almost anyone, including those struggling with gluten or lactose sensitivities, prostate problems, diabetes, and other ailments. This book equips you with tools for success, including tips for handling dietary lapses and navigating fast-food challenges. It also supplies recipes, sample meal plans, and answers to frequently asked questions from hundreds of Dr. Roseman's patients. Stop fighting cravings and take control with The Addictocarb Diet. Your struggle with weight loss ends here. Reclaim control of your health and well-being with The Addictocarb Diet.

Dr. Bruce Roseman has been a Family Doctor in private practice in Manhattan for 30 years and is affiliated with Mount Sinai Hospital where he holds joint appointments in the departments of Family Medicine and Ob/Gyn. He has served as medical editor for several food/health-related books and magazines including The Olive Oil Cookbook, The Low Cholesterol Oat Cure, Whittle's The Health Report, Big Bird Goes to the Doctor (Sesame Street) and as a medical columnist for Woman's World. He has appeared on numerous television and radio programs as a medical expert, including Live Wire (PBS), The Human Condition (NPR), Good Day New York, The Queen Latifah Show, and The Joan Lunden Show, and has been featured in magazines such as Guideposts and Parent. He is the author of A Kid Just Like Me, which details a popular method he invented to teach children with learning disabilities to read, while working with his son. He lives in New York City with his wife of over a quarter century, Ellen, and is proud to be the father of two fine young men, Joshua and Aaron.
Loading...
or
Not Currently Available for Direct Purchase