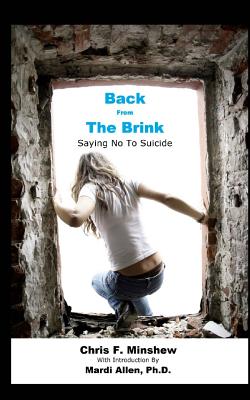 Back from the Brink

Saying No to Suicide

Author Chris Minshew was at a point in his life where he felt suicide was his only option. He made it to the point of placing the pistol against his head. Then something happened that brought him back from the brink of death. That experience-and what he was able to learn and accomplish in subsequent years-convinced him to interview others who had shared his experience. Back From the Brink is a collection of riveting stories told by individuals who either attempted suicide and failed-and then realized it was a bad choice-or individuals who have stepped back from that fatal choice and gone on to live satisfying lives filled with hope. There is life after saying no to suicide.

Back From the Brink has garnered high praise, including: "There is power in the personal narrative. Back From The Brink is an intimate collection of stories provided by individuals who've survived attempting suicide. This unique book gives a voice to a pervasive epidemic so many struggle to talk about. These are stories that need to be heard."-J.L. Craig, Ph.D., Clinical Psychologist

"Who knows more about suicide than someone who has attempted it, or changed their mind at the last minute, and gone on to live a productive life? Chris F. Minshew has done a public service by interviewing individuals who have attempted suicide and recovered, or who have journeyed to the brink of suicide and stepped back to say no to taking their own lives, himself included. Their stories of struggle and redemption are inspirational. This is an excellent book for anyone who is contemplating suicide because it shows there is always hope."-Kris Jones, MSW, Project Director, SAMSHA Suicide Prevention grant

"Through this compilation of the exceptional and courageous stories of those who have faced suicide, Chris Minshew provides a unique view into the agonizing struggle when one comes to the point of unbearable life. The personal chronicles of those who have survived suicide are both touching and disturbing as they tap into the struggles for the reader who relates to this overwhelming experience. This book will validate the sorrow of suicide, yet will offer hope for the return to life."-James D. Herzog, Ph.D., Clinical Psychologist

The book was written for those individuals who have survived suicide attempts and want to build a new life-and for those who are contemplating suicide but want to find encouragement from others who understand their problems.

There are an estimated 5 million individuals who have attempted suicide in America. You may be surprised to learn that one in every nine of us experience serious suicidal thoughts and about 5 percent of us will actually attempt suicide in our lifetime.

Chris F. Minshew, who has a MBA from Millsaps College, is the author of more than 150 poems and was inducted into the International Poetry Hall of Fame in 1997. He has worked as an executive at a Top 100 golf club, manager of a college football team, and a bounty hunter. Before starting each interview for this book, Chris shared his own personal story about backing away from suicide because he wanted each interviewee to know the person sitting across the table from them truly understood their personal struggle. Introduction and Postscript are by Mardi Allen, Ph.D. an award-winning psychologist with many years experience and co-author of How to Screen Adoptive and Foster Parents (with Professor Daniel Pollack of Yeshiva University in New York) and Sons Without Fathers: What Every Mother Needs to Know.(with James L. Dickerson, creator of the "You've Got a Friend" program for individuals with intellectual disabilities).
Loading...
or support indie stores by buying on