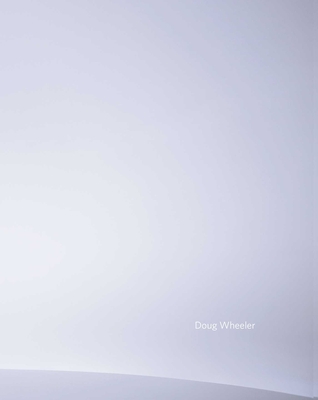 Over five decades, Doug Wheeler has pioneered the art of light and space. His work powerfully explores the way we perceive “empty” space—the way light can affect our perception and make emptiness feel full and dense. From his early experiences flying across the desert with his father, a doctor in Globe, Arizona, Wheeler developed a passion for the intensity and stillness of vast expanses, seeing in them a whole new set of possibilities for visual art.

Although Wheeler began his career as a painter, his wall-mounted artworks soon began incorporating light as a medium and quickly gave way to an unprecedented art-historical breakthrough: his construction of an absolute light environment, crafted in his studio in 1967. Since that unparalleled moment, Wheeler’s work has been exhibited widely all over the world; in the past decade, with numerous major gallery and museum installations, his reputation as the definitive light and space artist has been solidified.

This volume, featuring new scholarship by renowned art historian Germano Celant, traces the entire course of Wheeler’s career to date, from his first mature paintings to his immersive installations. Writing on Wheeler’s intense and direct engagement with the absoluteness in the optical fields he creates, Celant provides a detailed account for Wheeler’s development as one of the most original and influential artists of his generation. Wheeler’s work not only changes how we encounter reality after we see it, but also how we envision what is possible more broadly in visual art.

“And don’t miss the schematic drawing… It holds some answers… and secrets.”
— David Behringer

“The immersive works featured in this publication explore how colour and illumination can influence viewers’ perceptions of the world.”
— Staff

Doug Wheeler’s prolific and groundbreaking body of work encompasses drawing, painting, and installations that are characterized by a singular experimentation with the perception and experience of light, space, and sound. Raised in the high desert of Arizona, Wheeler began his career as a painter in the early 1960s while studying at the Chouinard Art Institute (now the California Institute of the Arts) in Los Angeles.

Germano Celant, renowned art historian and theoretician, is internationally acknowledged for his theories on Arte Povera. He is also the author of more than one hundred publications and curator of numerous exhibitions for museums and institutions worldwide. He is currently the artistic and scientific superintendent of Fondazione Prada, Milan and Venice, and the curator of both Fondazione Aldo Rossi, Milan, and Fondazione Emilio e Annabianca Vedova, Venice.
Loading...
or
Not Currently Available for Direct Purchase