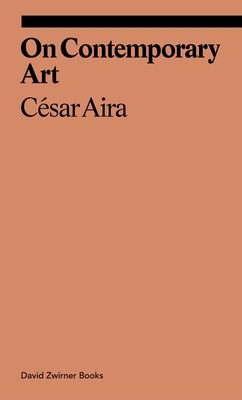 Translated into English for the first time, On Contemporary Art, a speech by the renowned novelist César Aira, was delivered at a 2010 colloquium in Madrid dedicated to bridging the gap between writing and the visual arts.

On Aira’s dizzying and dazzling path, everything comes under question—from reproducibility of artworks to the value of the written word itself. In the end, Aira leaves us stranded on the bridge between writing and art that he set out to construct in the first place, flailing as we try to make sense of where we stand. Aira’s On Contemporary Art exemplifies what the ekphrasis series is dedicated to doing—exploring the space in which words give meaning to objects, and objects shape our words.

Like the great writers Walter Benjamin and Hermann Broch before him, Aira operates in the space between fiction and essay writing, art and analysis. Pursuing questions about reproducibility, art making, and limits of language, Aira’s unique voice adds new insights to the essential conversations that continue to inform our understanding of art.

Praise For On Contemporary Art (ekphrasis)…

César Aira was born in Coronel Pringles, Argentina in 1949, and has lived in Buenos Aires since 1967. He taught at the University of Buenos Aires and at the University of Rosario, and has translated and edited books from different languages. Perhaps one of the most prolific writers in Argentina, and certainly one of the most talked about in Latin America, Aira has published more than 120 books. Rights of his books have been sold to almost 30 countries. One novel, La prueba (1992), has been made into a feature film, and How I Became a Nun (1993) was chosen as one of Argentina’s ten best books. Besides essays and novels Aira writes regularly for the Spanish newspaper El País. In 1996 he received a Guggenheim scholarship, in 2002 he was shortlisted for the Rómulo Gallegos prize, in 2015 he was shortlisted for the Man Booker International Prize, and in 2016 he was Guest of Honour at the International Literary Festival Berlin and was awarded the Premio Iberoamericano de Narrativa Manuel Rojas.

Katherine Silver is an award-winning literary translator and the former director of the Banff International Literary Translation Centre. Her most recent and forthcoming translations include works by María Sonia Cristoff, Horacio Castellanos Moya, Julio Cortázar, Juan Carlos Onetti, and Julio Ramón Ribeyro.
Loading...
or support indie stores by buying on