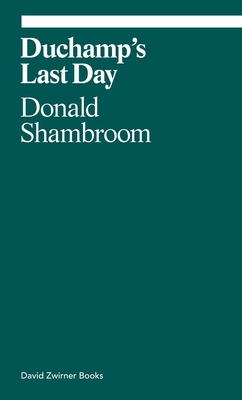 Just moments after Duchamp died, his closest friend Man Ray took a photograph of him. His face is wan; his eyes are closed; he appears calm. Taking this image as a point of departure, Donald Shambroom begins to examine the surrounding context—the dinner with Man Ray and another friend, Robert Lebel, the night Duchamp died, the conversations about his own death at that dinner and elsewhere, and the larger question of whether this radical artist’s death can be read as an extension of his work.

Shambroom’s in-depth research into this final night, and his analysis of the photograph, feeds into larger questions about the very nature of artworks and authorship which Duchamp raised in his lifetime. In the case of this mysterious and once long-lost photograph, who is the author? Man Ray or Duchamp? Is it an artwork or merely a record? Has the artist himself turned into one of his own readymades?

A fascinating essay that is both intimate and steeped in art history, Duchamp’s Last Day is filled with intricate details from decades of research into this peculiar encounter between art, life, and death. Shambroom’s book is a wonderful study of one of the greatest artists of the twentieth century.

"Duchamp’s Last Day highlights how, up until his very end, the artist placed substantial emphasis on gaiety and irreverence."
— Jeff Alessandrelli

“The American artist-writer-curator Donald Shambroom has written a breezy but minutely detailed book... It provides insightful supplementary information by focusing on the last day and death of arguably the most influential artist of the 20th century.”
— Joseph Nechvatal

Donald Shambroom is a visual artist, writer, curator, and videographer whose work is in the collections of the Museum of Fine Arts, Boston and the Metropolitan Museum of Art, New York. In 1973, after graduating from Yale University where he studied philosophy and painting, Shambroom moved to Boston to pursue his career as a painter. Shambroom’s interest in Marcel Duchamp began in 1969, when he read Calvin Tomkins’s The World of Marcel Duchamp in highschool. His essays have appeared in Weltkunst (Duchamp’s Last Readymade, 2014), CFile (A Urinal Called Fountain, 2017), and Tout-Fait (Marcel Duchamp and Glass, 1999 and Leonardo’s Optics Through the Eyes of Duchamp: A Note on the Small Glass, 2000). He produced “Common Screech Owl, a Miller’s River Story” (2013), a multi-media natural history installation, and “The Garnet Cabinet” (2012), a meditation on crystal structure. Shambroom’s work has been shown at Francis Naumann gallery and Half Gallery in New York, and at Howard Yezerski Gallery in Boston. For the past decade, he has lived and worked on the banks of the Millers River in north central Massachusetts.

Marcel Duchamp (1887–1968) was a French-American painter, sculptor, chess player, and writer whose work is associated with Cubism, conceptual art, and Dada. One of his best-known pieces is a urinal, titled Fountain and signed ‘R. Mutt’, which he submitted to an exhibition of the Society of Independent Artists in New York in 1917. In 1963, on the fiftieth anniversary of his 1913 Armory Show, Duchamp said, “In the end it comes down to doubting ‘to be’ … ” Beginning with the original exhibition’s Nude Descending a Staircase, No.2 (1912), a stationary painting that appeared to move, he proceeded to work patiently, often out of sight, on a fifty-year project to change, then eliminate any stable definition of the man-made concept of “art.” Duchamp remains one of the single most influential artists of the twentieth century.
Loading...
or
Not Currently Available for Direct Purchase