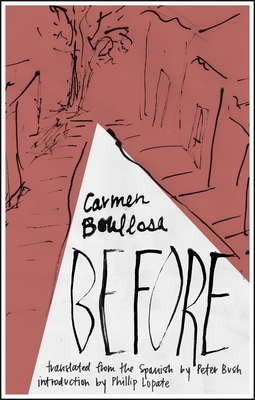 One of BBC's "10 Books to Read in August" "an altogether fresh take on the coming-of-age story...Boullosa manages to merge humor with panic seamlessly." -- Publishers Weekly Starred Review

"Carmen Boullosa is, in my opinion, a true master."--Alvaro Mutis

Part bildungsroman, part ghost story, part revenge novel, Before tells the story of a woman who returns to the landscape of her childhood to overcome the fear that held her captive as a girl. This powerful exploration of the path to womanhood and lost innocence won Mexico's two most prestigious literary prizes.

Carmen Boullosa, one of Mexico's leading writers, has published nearly twenty novels. Her most recent novel, Texas: The Great Theft, won the 2014 Typographical Era Translation Award and was shortlisted for the 2015 PEN Translation Award.

Carmen Boullosa is one of Mexico's leading novelists, poets, and playwrights. She has published over a dozen novels, two of which were designated the Best Novel Published in Mexico by the prestigious magazine Reformaher second novel, Before, also won the renowned Xavier Villarutia Prize for Best Mexican Novel; and her novel La otra mano de Lepanto was also selected as one of the Top 100 Novels Published in Spanish in the past 25 years. Her most recent novel, Texas: The Great Theft won the 2014 Typographical Era Translation Award, and was shortlisted for the 2015 PEN Translation Award. Boullosa has received numerous prizes and honors, including a Guggenheim fellowship. Also a poet, playwright, essayist, and cultural critic, Boullosa is a Distinguished Lecturer at City College of New York, and her books have been translated into Italian, Dutch, German, French, Portuguese, Chinese, and Russian. Peter Bush is an award-winning literary translator of Spanish, Catalan, French, and Portuguese from the UK. A former director of the British Centre for Literary Translation, Peter became a professor of Literary Translation at Middlesex University and later the University of East Anglia. "
Loading...
or
Not Currently Available for Direct Purchase