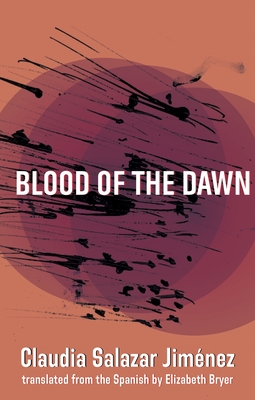 Blood of the Dawn

Blood of the Dawn follows three women whose lives intertwine and are ripped apart during what's known as the time of fear in Peruvian history when the Shining Path militant insurgency was at its peak. The novel rewrites the conflict through the voice of women, activating memory through a mixture of politics, desire, and pain in a lucid and brutal prose.

Claudia Salazar Jim nez (b. 1975, Lima, Peru), critic, scholar, and author, founded PERUFEST, the first Peruvian film festival in New York, where she lives, and won the 2014 Americas Narrative Prize for her debut novel, Blood of the Dawn.

Claudia Salazar Jimenez was born in Lima, Peru, in 1976. Currently based in New York, she studied Literature in the National University of San Marcos and has a PHD in Literature from NYU. Salazar Jimenez is a literary critic, cultural manager, and the founder and director of PERUFEST, the first Peruvian cinema festival in New York. Her short stories have appeared in several online publications and in international anthologies, and her debut novel, Blood of the Dawn, was awarded the Americas Narrative Prize in 2014. Elizabeth Bryer is a translator and writer from Australia. Her translations have previously appeared in Words without Borders and Overland Literary Journal, and her writing about translation has been published in Sydney Review of Books. In 2016 she curated an edition of Seizure Online, which she dedicated to translated fiction and poetry. Her creative writing has been widely anthologized in publications including The Lifted Brow, Meanjin and Best Australian Science Writing."
Loading...
or support indie stores by buying on