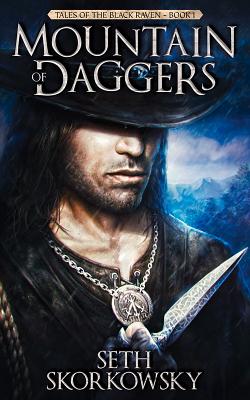 One part James Bond, two parts Gray Mouser, Ahren the Black Raven fights demons, duels beautiful assassins, and steals the rarest of treasures, all while dodging an endless army of bounty hunters on his trail. Mountain of Daggers is the first collection of fantasy tales by Damoren author, Seth Skorkowsky. Everyone agrees that Ahren is the best thief in the world. Whether he's breaking into an impregnable fortress, fighting pirates, or striking the final blow in political war, Ahren is the man for the job. After being framed for murder, his reward posters have named him The Black Raven. In order to survive, Ahren finds himself drafted into the Tyenee, a secret criminal organization whose influence stretches across the world. Their missions are the most daring and most dangerous, and the penalty for failure... is death. When no one else can do it, they send The Black Raven. Mountain of Daggers is the first book in this collection of tales by Seth Skorkowsky, the author of Damoren, book one of the best-selling Valducan urban fantasy series.