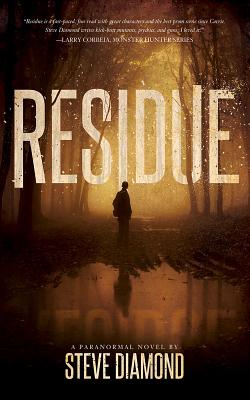 Residue follows 17-year-old Jack Bishop after his father is abducted and a monster is let loose in his small town. As he looks for his father, he begins to notice that he can see the psychic residue left behind by monsters and murder victims. Along with the mind-reading Alexandra (Alex) Courtney, Jack uses his growing ESP abilities to stop the deaths in the town, and find out why his father was taken. Written in the vein of works such as Jonathan Maberry's YA Rot & Ruin series, though with supernatural horror and paranormal subject matter, Residue is book #1 in a new series about Jack Bishop, as written by acclaimed debut author and founder of Elitist Book Review, Steve Diamond.

Steven Diamond founded and runs the review site, Elitist Book Reviews (www.elitistbookreviews.com), which was nominated for the Hugo Award in 2013, 2014, and 2015. He writes for Ragnarok, Baen, Privateer Press, and numerous small publications. Residue, a YA action-horror novel, is his first full-length published work. He is also the editor of the Horror anthology, Shared Nightmares.
or
Not Currently Available for Direct Purchase
Copyright © 2020 American Booksellers Association