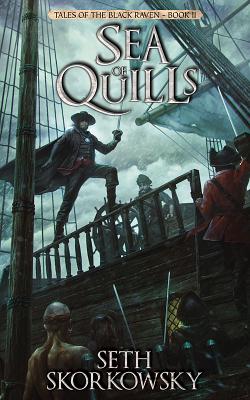 Nine tales of adventuresome sword & sorcery by Seth Skorkowsky, author of the Valducan series. Thieves, assassins, pirates, sellswords, and cutthroats abound in this second volume of the Tales of the Black Raven. For Ahren, it's no longer a question of someone trying to kill him; it's who will try next. Still on the run for a murder he didn't commit, Ahren adapts to life as an outlaw as his reputation of the Black Raven grows. Yet nothing comes easy. Dogged by bounty hunters, he finds himself crossing steel with pirates on the high seas and battling monsters in subterranean cities. If that wasn't enough, he's paid to assassinate an immortal and must break out of a heavily-fortified prison. Just another day in the life of the Black Raven. Sea of Quills is the second book in this collection of tales by Seth Skorkowsky, the author of Damoren and the best-selling Valducan urban fantasy series.