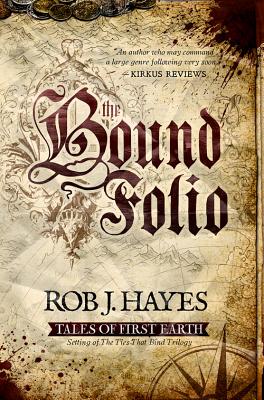 The world is full of heroes, villains, and all the shades in between. The Bound Folio tells their stories from the tortured childhood of the legendary Blademaster the Sword of the North, to the humble origins of the Queen of the Five Kingdoms, to the death of one of the world's greatest assassins. This anthology collects together eight dark stories of swords, sorcery, and seduction from First Earth, the setting of Rob J. Hayes' The Ties That Bind trilogy.

Having served in a hundred different offices as a keyboard monkey, Rob J. Hayes finally decided to follow his life long passion of daydreaming. After writing a small hoard's worth of short stories (many of which can be found on his website), he released his debut trilogy The Ties that Bind in 2013 as an indie publication. He signed a deal with Ragnarok later that year to bring The Ties that Bind to traditional publication, and he recently finished a follow-up series, entitled Best Laid Plans and set in the same world of First Earth. When not writing Rob is usually found card gaming, computer gaming, board gaming, dice gaming, airsoft gaming, or pretending to be a Viking.
Loading...
or
Not Currently Available for Direct Purchase