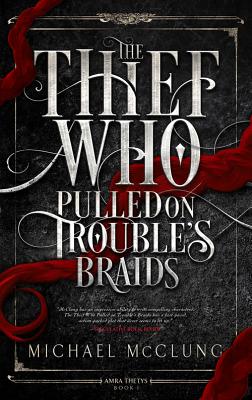 The Thief Who Pulled on Trouble's Braids

Amra Thetys lives by two simple rules: take care of business, and never let it get personal.
Thieves don't last long in Lucernis. When a fellow rogue is butchered on the streets in a deal gone bad, Amra turns her back on burglary and goes after something more precious than treasure: revenge. Revenge, however, might be hard to come by. A nightmare assortment of enemies--including an immortal assassin and a mad sorcerer--believe Amra is in possession of The Blade That Whispers Hate, the legendary, powerful artifact her friend was murdered for. And Amra's enemies will do anything to take it. Trouble is, Amra hasn't a clue where the Blade actually is. She needs to find it, and soon, or she'll be joining her colleague in a cold grave, rather than avenging his death.

Michael McClung was born and raised in Texas, but now kicks around Southeast Asia. He's been a soldier, a cook, a book store manager, and a bowling alley pin boy. His first novel was published by Random House in 2003. In his spare time, he enjoys kickball, brooding and picking scabs.
or
Not Currently Available for Direct Purchase