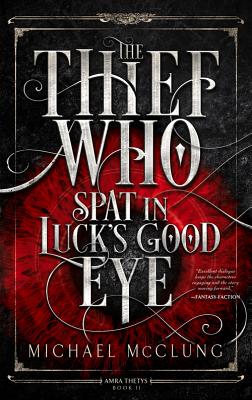 The Thief Who Spat in Luck's Good Eye (Paperback)

Amra is a thief with morals-she won't steal from anyone poorer than she is. Fortunately, anybody that poor generally doesn't have much worth stealing Holgren is a mage with a distaste for magic and a soul bartered away to dark powers. Together, they embark on a quest for the fabled city of Thagoth, where the secret of immortality is rumored to be hidden.
Amra and Holgren aren't the only ones after the secret. Many others seek to utilize the hidden magic for their own twisted ends, and waiting in the ruined city with dark plans for the world are the twin gods Tha-Agoth and Athagos, a brother and sister whose illicit passion is as destructive and vengeful as they are. As potent sorceries clash in a violent struggle for dominion over all that lives, Amra and Holgren face a choice between the unthinkable and the unbearable, with the fate of the world hanging in the balance. Originally published by Random House under the title Thagoth, The Thief Who Spat In Luck's Good Eye and won the 2002 Del Rey Digital first novel competition (fantasy category).

Michael McClung was born and raised in Texas, but now kicks around Southeast Asia. He's been a soldier, a cook, a book store manager, and a bowling alley pin boy. His first novel was published by Random House in 2003. In his spare time, he enjoys kickball, brooding and picking scabs.
or
Not Currently Available for Direct Purchase
Copyright © 2020 American Booksellers Association